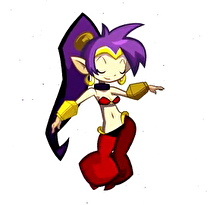 Shantae: Half-Genie Hero, a new title in the Shantae series, has been announced as WayForward's previously-teased Kickstarter project.

The game, set to take place after the events of the upcoming 3DS title Shantae and the Pirate's Curse, will feature a completely new HD art style. Should the project be funded, Half-Genie Hero will launch on all current and next gen systems, including Wii U, Xbox One, Xbox 360, PS4, PS3 and Steam.

During the first day of the campaign and at the time of this writing, the Kickstarter has reached $83,660 of its initial funding goal of $400,000. Backer rewards include collector's edition packs featuring digital downloads of the game, lenticular motion posters, gold coins, t-shirts, art books and the opportunity to hang out with the WayForward development team during the game's wrap-up party.

The campaign ends on Friday, October 4.

I pledged $15, will probably bump it up to $25 for the soundtrack. I hope the game meets at least all the stretch goals for the extra levels. I think $1.2 million for the final bonus level is attainable (the last stretch goal is a silhouette of a TV so that might be an animation short of some kind which would be jawesome). The crowd funding effort is off to a good start with nearly $90,000 in less than a day.

I will not back this unless there's a 3DS version. Or Vita. Either or.

Looks like they hit 90K.  Not bad considering the kickstarter is only 12 hours in.  Here's hoping they can keep up that momentum.

I'm super stoked for this, as if anyone expected any different. I have to say the timing is a little unfortunate, considering it's almost directly competing with Non-Mega Mega Man. Sheesh, I'm gonna be so broke from proposed future games this month that I'll have no money left for the games that are coming out.

Yeah, this really is the worst possible time to launch a gaming Kickstarter.

Geez... Already pledged to Mighty No. 9. They couldn't have waited a month?

Yeah. Mighty No. 9 kinda ate most of the thunder that 1/2 genie hero had... and really, I'm torn since Shantae and Mega Man 6 are my second and third favorite games of all time respectively.

I also would -LOVE- to contribute to that $350 stretch goal.  although I don't have any recent Shantae fan art I could show off here, I would like to say that Matt Bozon's character design is one that inspires me quite a bit in my own work, and I would -LOVE to make an epic Shantae mural to give to wayforward for them to display in their work.

http://fav.me/d6k5g9v Fair warning, this happens to be Pony fanart, but it's a pretty good measure of my current skill, even if there are a couple of anatomical issues that I am not pleased with.

How much of my money will go towards license fees to Microsoft?

As if i needed more reasons to dislike Kickstarter...

Yeah, this really is the worst possible time to launch a gaming Kickstarter.

Yeah... this is a really minor gripe, but GOOD WAY TO SPOIL HER GETTING HER GENIE POWERS BACK, GUYS.

Is shantae even that good?

Shantae is like a strange cross between oldschool Castlevania games and the original Wario Land with some rhythm game elements thrown in. It has the best 8-bit sprite animation you'll ever see. And boobies.
Risky's Revenge doesn't quite hold up against the original so much, but in its own right it's still a lovely game, and in its defense it was intended as a trilogy of episodes that had to be cut short after the first chapter.

Really though, if you have to ask, the GBC game is right there on the 3DS eShop for a very affordable price. Go get it. And then back this Kickstarter!

Wayforward just gave the mp3 to the theme "Dance in the Darkness" for free (not sure if it was just for people who pledged). Thanks. I don't really need the soundtrack now.

I think the game will meet the initial goal and maybe squeeze by with the first stretch goal. It's a shame that we'll probably miss out on all those extra chapters.

Yeah.  It doesn't seem as if it currently has the momentum it needs to get to those extra chapters.  As someone mentioned on another thread, the timing of this kickstarter was lousy.  We're at the cusp of the Fall game rush with two new consoles being released.  It's also unfortunate for Wayforward that Mighty No. 9 kickstarter beat them out of the gate by a few days.  There may not be much of an audience overlap, but I think that it probably took a significant amount of wind out of Wayford's sales.  I probably would have contributed to higher tiers for both projects if the kickstarters weren't going on concurrently.  Ah, budgets.

Is shantae even that good?


I don't think so, personally.

I'm currently playing through it on 3DS and I've been finding the world design to be really quite feckless and monotonous, whilst the enemies are absolute sponges who take waaaaaaaay too many hits to die (especially at night). On top of that, warp points are locked behind collectibles despite the fact that they're an absolute necessity if you're to avoid becoming completely frustrated with the game's enemies, which constantly jump out from nowhere. The enemies in Shantae cause for me the same frustration that hidden spikes in the Sonic games do. The upshot of which is that if I haven't found all 4 baby squids in a given area (the collectibles required to unlock a warp point) then I feel compelled to comb back through the dungeon I just beat rather than move on to next thing. I really need to open up those warp points because I really don't want to have to play through those connecting areas again and have to deal with the enemies and the platforming (which is a sure sign that I'm not really digging the game).

In my opinion Shantae is a game which would have been made infinitely more playable by the inclusion of some subtle and some not so subtle changes. Had enemies been made less cheap and less resilient to attacks, the connecting levels between towns made far shorter and been designed better, and had warp points been made to unlock once an area's dungeon had been beat, then I think it would be a much more fun game.

Based on what I've seen of the Pirate's Curse, however, that game seems to be a lot quicker, which to my mind is a very good thing.

By the time you've beaten the fourth labyrinth dungeon, overworld travel is largely skippable by means of transformation, and you'll want to comb through the level transitions with each of her new abilities in order to find the hidden items and heart pieces anyway.
Are you using the attack items they sell in each town? The most hits an enemy will take is five during the daytime, and the items can make quick work of anything. Learn enemy placements -the only random appearance ones are the scarecrows - and practice your dodging, you'll be fine!

I can understand it's not everyone's thing. It was heavily inspired by early Castlevania games and the difficulty is up there with NES titles.

Wayforward just gave the mp3 to the theme "Dance in the Darkness" for free (not sure if it was just for people who pledged).

Haven't pledged, but I got it too from one of their updates post. Sick song.

I will not back this unless there's a 3DS version. Or Vita. Either or.

Vita was just added to the list of platforms. It's not a stretch goal. Wayforward just added it to the original goal as they're porting their engine to Vita as part of their "work for hire" business (not sure exactly what that part means). That means all one of you with a Vita who wanted this game on the Vita and refused to pledge until that happened (e.g. just insano) can now support the game!