Retro City Rampage Coming to the 3DS Later This Year

The WiiWare game is making its way to the 3DS eShop 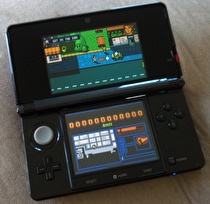 Retro City Rampage is making its way onto the 3DS, Nintendo and developer Vblank announced today.

Originally released on other platforms including the Wii, Retro City Rampage is an 8-bit style take on Grand Theft Auto that pays tribute to games of the era.

The 3DS version will include all the content from other platforms including the Retro+ Enhanced Graphics mode, though missions are being tweaked in order to work with the more zoomed in camera, due to the system's limitations. The game will not have 3D, due to its top-down view, which would require all objects to be rendered in 3D.

Retro City Rampage will be playable at PAX Prime on the 3DS at Nintendo's booth.

I already have this on my PS3 and my Vita. I don't think I need another copy.

Yeah, I got this free on PlayStation+ and it's been just sitting unplayed on my Vita for months.

Sweeeeeeeeeeet. I'll definitely pick this up, though I would prefer it on Wii U as opposed to 3DS.

Now I will buy this. The only way games like this get played nowadays is on 3DS.

I'm glad this is coming to the 3DS, but I just keep about how GTA Chinatown Wars did and I wonder if this will be any more successful. Probably because Vblank doesn't have the same reputation as Rockstar and no one is really going to complain about graphics and other superficial elements of the game. I bought RCR for PS3, but I barely touched it so maybe a 3DS release will get more action out of me.

I've been interested in this game, but the only platform it is on I own is a Wii (well PC if it's on it but I don't play games like this on PC) and I don't play games much on my TV anymore.  Like Razorkid this is something I can now buy.

I'm going to wait for reviews because I'm hoping for it to be gameplay with spurts of 80s references instead of the other way around.

I'll probably get this, too. Though, like StrikerObi said, I'd rather it be on Wii U eShop.

I don't know. I remember being excited for this game once, but when the game was finally released it's supposed reliance on 80's references and parody kind of killed any enthusiasm I had.

If I were to play it on any platform though, it would probably be 3DS. I do like the idea of playing it on the go.

Apparently the review on Nintendo magazine(Australia) gave it 8.5/10 so i'll pick it up!

I'm going to wait for reviews because I'm hoping for it to be gameplay with spurts of 80s references instead of the other way around.

Don't hold your breath.
I got this game on Wii, because i absolutely had to after so many years of waiting, but it was rather disappointing.
Hopefully someone else will enjoy it more than i did on 3DS.