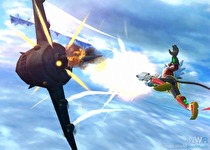 The reason why Kadokawa Games remained so silent on the title, according to Yasuda, is that media simply lost interest in the title.  The game was originally in development for 3DS and Wii, but as the main project was for Wii, the controls didn't feel right on 3DS so they determined they had to move in the direction of making a control style for 3DS. They want the player to really have tight controls and feel the flying elements of the game with each button push.  The company wants to make a game that is going to be really enjoyed in full 360 degrees, so the producer is taking his time with the game.

According to Yasuda, the Nintendo 3DS version is roughly 70% complete and the quality is currently in a ''plus alpha'' state. What this means is currently still a secret and the president hopes that we are looking forward to the game. There will more information released in the near future.

Big thanks to Daniel Teramoto Coniglio for the translation!


I clicked to the game's website and they have a movie of the game:


The game looks neat. I hope it comes over.

I hope they actually finish it for Wii & don't upgrade it to merely a WiiU game with Wii graphics.

There is no such thing as japanese indies.

So exciting. I fell in love with how this game looked a felt and I hope that it receives a western release- though I think the Wii control scheme is amazing, I wouldn't mind the 3DS either.

Even if their publisher is willing to release a Wii game in 2013 (or 2014...?), it probably wouldn't be worth it, sad to say. They should probably ditch it and focus on the 3DS version, releasing a Wii game seems too risky for a small company.

I think i will stick with Kid icarus: uprising, thank u very much! ;)