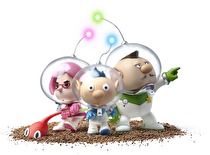 Pikmin 3 launched in Japan earlier this month, and the game will be arriving in Europe, Australia and the US very soon.