The Pokémon developers are set to show us all how card games and horse racing mix together nicely. 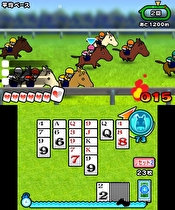 Solitiba, a new title by Game Freak, is set to arrive on the Nintendo 3DS eShop on July 31 in Japan for 500 yen. The game mixes together the game of solitaire and horse racing.

Solitiba will focus on two different phases for gameplay - a Solitaire Phase and a Control Phase. The Solitaire Phase simply has players playing solitaire while the Control Phase gives players a chance to control the path of the horse by plotting a path on the touch screen. The better game you play of solitaire, the better your horse will race. Items and power-ups are available during the last stretch of the race, including the ability to use a whip to speed up your horse. Players will also be able to train and raise their horses as well as have the ability to share them online via QR Code.

There is currently no word if Solitiba will receive a Western release.

I KNEW IT! And this was exactly what I wanted. Game Freak should just stop making Pokemon games forever and continue making horse race solitaire.

I'm surprised there is a market anywhere for either solitaire or horse racing games.  Maybe that's the logic - that embarrassingly lame forms of entertainment don't have much of a market on their own but you if combine them you'll eventually make up a large enough target audience.

So I should start work on a horseshoes, 4H Club, birdwatching mashup.  I'll make dozens of dollars!

So this is what Game Freak was teasing when they said "The well known game, played all around the world, is about to be reborn thanks to a surprising collaboration."

I like the concept of tying your performance of Solitaire into how well your horse can perform in the race, but since it's...you know....Solitaire, that sort of deflates my interest in it.

... I feel like this was a drunk dare that everyone forgot to say "Just kidding! You don't have to really do that."

I will never get my hopes up like that again.

I have to say, that is a pretty brilliant combination!

And you thought Henry Hatsworth was a random combination.

The game Fairway Solitaire on PC/Mac/iOS/Android was a big hit by combining solitaire with golf, and it was also really fun, so I am looking forward to Solitiba since it seems to be similar.

So this is the "Big Collaboration?"

supervisor: HEY,  I SAID NO SOLITAIRE, TURN THAT OFF
dev: but this isn't solitaire there's horse racing, its just a little something I came up with, frank helped me out a bit, ooh the race is starting

supervisor: why are there horses in solitare

dev: you see playing solitaire well makes the horse do better in the race

supervisor: I regret to inform you that this endeavor will have consequences for your job here

supervisor: such as your new role overseeing this games development for release on the eshop

I like solitaire, but couldn't care less about horse racing. $5 is not that bad, at least if the actual solitaire part is good.

This is for Japan. They like their horse racing video games, so not much of a surprise.