Miyamoto's desire to create a Link to the Past remake was almost a reality. 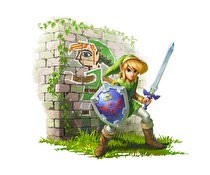 The Legend of Zelda: A Link Between Worlds was originally meant to be a 3D remake of the Super Nintendo classic A Link to the Past.

Eiji Aonuma told Wired in a recent interview that he "didn't want to make a remake," after being given the task to create a 3D remake of A Link to the Past by Miyamoto, but he wasn't sure how to "incorporate this world into [his] new project."

At the same time, one of his designers "was working on this concept of having Link go into the walls," and, after seeing that, the idea of making a new Zelda game with those mechanics "clicked."

This was all in response to a question about how the top-down Zelda-style levels in Super Mario 3D Land were well liked by fans, and Aonuma confirmed that Miyamoto himself came up with them.

I'm so glad they decided on making a new game.  A Link to the Past is my favorite Zelda game, but I feel like a remake should be reserved for if considerable improvements can be made to the game, and I think that while the new graphics look nice, the SNES graphics of ALTTP is part of the charm.


Not only that, but I'm excited to have a new game set in the same world as ALTTP, and a handheld Zelda game that won't be heavily leaning on touch controls.

"Journalists, please explain to your audience that Link to the Past 2 is a new game...because is WAS a remake."

Well, that certainly explains why so much of the game is a carbon copy of Link to the Past.

I could've sworn there was something about Miyamoto saying he didn't want to do a LttP remake. I might go look that up.

I could've sworn there was something about Miyamoto saying he didn't want to do a LttP remake. I might go look that up.

So he has been interested in re-visiting the world of A Link to the Past for a long time.

Well, there you go.

Thanks for enabling my laziness.

I think we all kind of suspected this after seeing the overworld.