Gamers in Japan can get their hands on two top-notch Super Nintendo RPGs starting today. 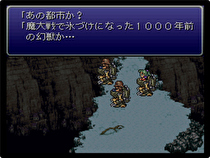 There is currently no word as to when these titles will release on the Wii U in the West.