Mega Man X Arrives on Wii U May 30

More Virtual Console goodness comes to the Wii U eShop. 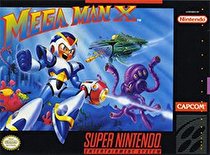 Mega Man X will be released on the Wii U eShop this Thursday, May 30.

Mega Man X, originally released on the SNES, is the first in the Mega Man X series. It was followed by X2 and X3 on SNES, and multiple more sequels on other systems including the GameCube.

And the long, slow retread of Virtual Console continues.

Mega Man X is a great game though.

And the long, slow retread of Virtual Console continues.

Mega Man X is a great game though.

You are right, my mistake I'll change that thanks.

I could be tempted at some point...though I'm a little discouraged after playing Kirby's Adventure and Super Mario Bros. 2. Something feels really off with them, even compared to the Wii VC versions of the game. It's like Nintendo slapped an extra frame or two of lag on top of the original games or something (and these are games I can play in my sleep normally).

(And no, it's not my TV, as they feel noticeably laggier than VC games on my Wii. I tested it with component cables to see if that would help, but no dice. I saw on Reddit that other people were having the same problem - the games definitely have some lag introduced. If you don't notice it, chances are that your TV just has low input lag, while on ours, it's just enough to put the games 'over the edge' in terms of playability)

Edit: @night814 - if you want, Mario RPG is a reward on Club Nintendo right now. You could at least grab it for free and then choose to upgrade when the time comes.

Squadron I've had it since it was first on VC :)