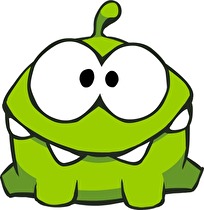 Cut the Rope, the popular mobile puzzle game, will be getting an overhaul for the Nintendo 3DS. The game was announced this past weekend during iDEAME, a gathering for indie development in Madrid, Spain.

The port will be developed by Abylight, which are responsible for various digital titles on WiiWare and DSiWare. The game's original creator Zeptolab is set to publish the game and will do so through the Nintendo 3DS eShop. Not many things are known about the conversion, though the extra PC/Mac levels will be added to beef things up. It will also include various achievements and online leaderboards, so that you can compete with friends over Nintendo Network.

Cut the Rope has in the past been released on Nintendo DSiWare, where a purchase will set you back 500 Nintendo Points. How much the game will cost on the Nintendo eShop and when it will be available, is currently unknown.

If this pulls a Gunman Clive, I will laugh... then cry.

If this pulls a Gunman Clive, I will laugh... then cry.

You mean in terms of sales? That would be HUGE for the eShop in general, the two iOS versions (there is one version for iPod Touch/iPhone and a separate one for iPad) have been a massive success. They sold over 1 million copies in the first 10 days alone and was the fastest selling game in Apple App Store history. Gunman Clive was relatively unknown on the App Store.

I wonder what the pricing on this will be in comparison to the smart phone versions...

The iOS game made significant use of the multitouch functionality of the hardware, so I don't know why you'd want to play it on a platform that doesn't offer that.

This game was free on my phone. I didn't think it was a particularly fun game.

The iOS game made significant use of the multitouch functionality of the hardware, so I don't know why you'd want to play it on a platform that doesn't offer that.

I only have the Android versions, but I wouldn't say "significant" use.  It's there, but there's not a lot and it's nothing that can't be tweaked.

This also came out on DsiWare I believe? I'm absolutely certain I've played it before on a Nintendo handheld, so I think the issue of not having multi-touch is a solved problem.