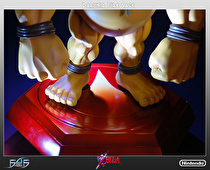 First 4 Figures originally released a Darunia figure in 2011 that is nearly identical to the new exclusive version. The only difference between the old Darunia and the exclusive model is a design change given to the figure’s base. The original version features a carpet from Darunia’s room, while the exclusive version’s base is meant to look like the fire medallion he stands on in the Chamber of Sages.

First 4 Figures has also hinted that they are working on making the other Ocarina of Time Sages on their official Facebook page.

I have quite a few of these but had to skip this one and a few others. I just don't have space anymore. After I get Tails and the other 2 Ninja Turtles, I'm done for years.

I'm really not to happy about this. I purchased the original Darunia two years ago. This just seems like a cheap tactic for First 4 Figures to make more money by, in a way, re-releasing a previous figure that was supposed to be limited edition. I'm also sick of how nearly every figure they make gets a standard and exclusive version these days.

It may sound bad, but for the size and quality it's not a bad price for this figure. Add to that the extreme rarity. I've purchased every Nintendo figure from F4F and can say the quality is top notch. Some of the figures I've purchased are now worth well over $1,000.

I am sure it is high quality, but I personally can not justify that much for something that will just sit there doing nothing. But others would find it worth it. I hope they enjoy it.