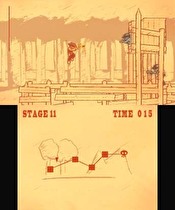 Gunman Clive is a side-scrolling platform game with a unique pencil line graphic style. The setting of the game is the old west, and the gameplay takes inspiration from classic platformers, the biggest inspiration seemingly being Mega Man. Check out our review of the game.

Cool! I ran into this Stage 10 bug myself. Turning off 3D allowed me to get past it, though.

I had a bug on the first boss where the game just hung after I killed him.

I"ve played through this 3.5 times full 3D and never ran into anything interesting.

I've played through the game a TON with 3D off and never had an issue.

I started up a completed save file (Clive, Hard) on Level 10 with the 3D on.  Shortly after, the game just FREAKED THE SHIT OUT.  Had to hard boot my 3DS to get me out of it.

I had a hard lock too. I can't remember which level it was though. Luckily the levels are pretty short, so I didn't lose much progress.