Four Games Up for Grabs Through Club Nintendo 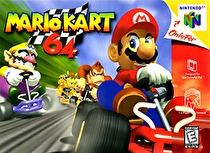 Tetris is the classic 1989 Game Boy puzzler featuring falling Tetriminos. This classic can be yours for 150 Coins.

Snowpack Park places your Mii in the role of caregiver of up to 100 penguins. Developed by Skip and released in 2010, you take part in catching penguins for your park and playing mini-games with your feathered friends in order to keep them happy. For only 150 Coins you too can be one with the penguins.

Punch-Out!! Featuring Mr. Dream is the NES classic, sans Mike Tyson. Learn opponent patterns in order to dodge blows and help Little Mac fight his way to the top. Roll with the punches and you may redeem 200 coins to download.

Mario Kart 64 is considered by many to be the best Mario Kart in the series. Originally released in 1997, the game stars Mario and friends racing Mario Kart style with banana peels and shells. 200 coins and you can rev up and join in on the fun.

All the above games are available now until February 10.

You know, it's not always good to look a gift horse in the mouth, but the free game offerings lately have been sort of unbalanced. I liked the first few months with Majora's Mask, Excitebike World Rally, Fluidity, etc being offered that gives it that "missed it the first time around" feel to it and makes me want to spend my coins on them.


But, Mario Party, Mario Kart 64, and 1080- while they may be good games and all, are OLD multiplayer games with not much to offer in single player mode. When half of the game is only good in MP, and since I'll probably never get anyone to play those games with me when newer, better versions are lying around, I lose any desire to play them.


I'd like more adventure games, indie games, and lesser known classics being offered.


* Punch-out is a great choice, but two things:  I have played that game so many times I don't think I'd spend any coins on it, real or otherwise.  Also, didn't they already do a punch-out game awhile back? The one for the SNES?

Now that I think about it, didn't they do another Super Mario Kart, too?  Man, a tad repetitive.

These things appear to have gone up in "price".


1080 Snowboarding and Super Punch-Out were 150 coins each. So was Majora's Mask, I believe.