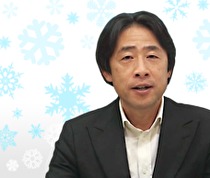 ''Since the first European Nintendo Direct aired this April, there have already been five broadcasts that I hosted and provided game information directly to you. As some of you know, I had seldom appeared in public before starting Nintendo Direct (because I was too shy!) and in the beginning, I was quite hesitant about hosting Nintendo Direct for many reasons. To begin with, I was almost certain that no-one would recognise me when you saw me on screen, I was worried that you might not understand my English because of my awful accent (I still get laughed-at for my English pronunciation from time to time!) and I wasn’t sure if you would even be interested in watching a European Nintendo Direct in the first place.''

Despite the initial fears, he started doing it and appreciated what the fans had to say. Later on, he seems interested in reading comments after his presentations:

''Anyway, enough joking around. I am always reading every single comment that you kindly post on various websites after each Nintendo Direct. I jump for joy when I read that someone is excited about an upcoming game that I announced. Conversely, I feel down when I read comments such as “I’m disappointed that there was no new information” or “The release date is too far ahead!” (which was the case last time…). However, whether it be praise or criticism, I really appreciate hearing your forthright feelings towards Nintendo and our products. It may just be my personal impression, but I feel like we’ve become closer to you after every Nintendo Direct.''

Even Nintendo of Europe's president wants to join some quality gaming time: Mr. Shibata says he has the sudden urge to play a FPS, mostly due to comments from Miiverse. He never played one before and couldn't really do it well with a Wii Remote and Nunchuck, but he decided to take the challenge.

'However, I don’t want my wife to see how badly I play, so I’ve been playing quietly just on the GamePad screen. It’ll take me quite a while until I can play expertly as many of you do, but my goal is to join you one of these days!''

You can read the entire message on the European Nintendo website.

What a cool guy.

It makes me want to watch a European Nintendo Direct, which I haven't done.

I'm really liking this dude! Not only was this a good read, but he comes off very sympatic during the directs.