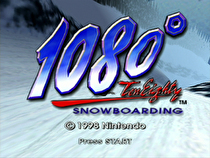 1080° Snowboarding is now available as a Club Nintendo reward for 150 coins. This Wii Virtual Console download will be available as a reward until January 6, 2013.

1080° Snowboarding replaced ThruSpace as this week’s reward. Those looking for a portable downloadable Club Nintendo reward also have the option of buying Brain Age Express: Sudoku for 150 coins until December 16, 2012.

This was a cool game then and still is. (Sadly this news does me no good because I downloaded it the day it came out on the Wii virtual console.) Oh well. I have no regrets about when I downloaded it.

This was a cool game then and still is.

And I guess the 3DS reward next week will be up for four weeks too, because the Club Nintendo guys are clearly setting it up to not have to work the holidays.

One thing I really like about 1080 is that Nintendo could probably have easily made this Mario Snowboarding but they didn't.  And it isn't like this game bombed without the established IP.

This was released during a time where Nintendo was constantly accused of being "kiddy" but this did not look like a kiddy game.  And it wasn't some gorefest either.  It was just a snowboarding game with visuals that fit a snowboarding game.  The characters were proportioned like real people and the mountains were all just like normal real life mountains.  Asking for non-kiddy games doesn't mean that everything has to have "mature" content.  It can be as simple as not making a game specifically cutesy if it doesn't need to be.  1080 was no kiddy game but also was appropriate for kids like Metroid and non-toon shaded Zelda.  It proves that Nintendo can appeal to all audiences without playing to the lowest common denominator.

1080 also required some real skill to even get anywhere.  It was practically a sim.  Yet Nintendo was not afraid that that would narrow the game's appeal.  And it didn't and the game was a hit.

Of course these days 1080 would have used the Miis and the game would only have appealed to casuals and kids.  So many lessons were shoved right in Nintendo's face during the N64 years and they pretty much ignored all of them.

Of course these days 1080 would have used the Miis and the game would only have appealed to casuals and kids.  So many lessons were shoved right in Nintendo's face during the N64 years and they pretty much ignored all of them.

All of which is false, but why let facts get in the way?

It's not false as much as it's pure speculation. Looking at Nintendo's M.O. the last generation I think there's a real chance Ian's right on that, but it's of course impossible to make any solid claim.