The mini-game collection won't make it this year, but early next year instead. 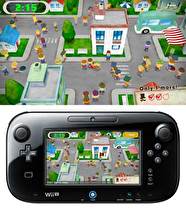 Game & Wario will be releasing in Japan early next year, according to Nintendo President Satoru Iwata during this mornings Nintendo Direct presentation.

Game & Wario features 16 mini-games, all of which can be played solely on the GamePad. These mini-games also support up to 5-player multiplayer.

During the presentation, a game was shown off in which you complete a plethora of micro-games while pretending to be asleep.

Game & Wario is still scheduled to release during the systems launch window in North America.

Not terribly interested, but I would consider downloading it from the eShop if the price was maybe $40 instead of 60.

This compilation seems a lot more fun than I thought in the past. If it's $40 or under, I'd definitely consider getting it. That kid playing games in bed was pretty awesome.

I don't get this game. It's just why? all around.

Game & Wario typed in GW font and style. Okay, i see that WarioWare characters are in. But where's Mr Game Watch then?

And 16 games is pathetic.

Hopefully i'm mistaken and it's not a mishandling of two franchises at once and this will turn out to be a good game.