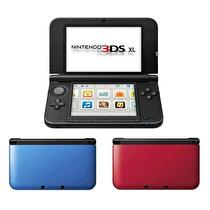 Nintendo of America will host a Nintendo Direct tomorrow morning at 10 a.m. ET/7 a.m. PT that will focus on the upcoming 3DS lineup, including a tease of 2013 releases.

Nintendo's Facebook and Twitter pages revealed the event with this statement: "Tune in to Nintendo.com tomorrow at 7AM PT for a new Nintendo Direct! We’ll be taking an in-depth look at several announced Nintendo 3DS games coming this holiday season, and there might even be a sneak peek at a few 2013 titles!"

Nintendo of Europe hosted a similar Nintendo Direct at the beginning of October, which revealed Crashmo, Level-5's localization of Guild 01 titles for eShop, and more. Currently, Level-5's first Guild 01 eShop title, Liberation Maiden, is slated for release tomorrow. Those games, along with Professor Layton and the Miracle Mask (releasing on October 28), Paper Mario: Sticker Star (November 11), Brain Age: Concentration Training (December 3), and Fluidity: Spin Cycle (December 27), are all likely to be discussed.

As for the 2013 titles that could be mentioned, we might hear more about Luigi's Mansion: Dark Moon (Q1 2013), Animal Crossing (first half of 2013), Fire Emblem: Awakening (2013), and Tokyo Crash Mobs (early 2013). Additionally, we could hear of titles we haven't previously heard about.

Let's say it with me.  FAIL.  Seriously, does NoA even realize that they are releasing a CONSOLE in less then a month and there is still tons we don't know like oh How are we going to select the game to Play.

I'm hoping that this means they're saving the WiiU details for after the tech industry's week from hell (Apple keynote, Windows 8 release, Google announcement Monday).

Or maybe I'm just giving Nintendo too much credit.

Im ready to learn more about the future of 3ds over the Wii U.  or maybe they will discuss their interconnectivity. :P  As long as we get a new puzzle and some stationary I don't care.

I've got a black Wii U preordered, I'm going to love it, but with that said, I seriously doubt I'll spend as much time in a year as I do with my 3DS in just a month.  I'm a big fan.  I've got 23 retail 3DS games.

What in the world can the announce?  It's kinda an open book at this point.  We know what's slated for the holidays (Sticker Star, Layton) and what's coming in 2013 (Luigi, Fire Emblem, Animal Crossing).  All pretty known quantities.

There's not much in this Nintendo Direct I'll likely be dying to know, but I do hope NoA is finally going to get around to announcing the 3DS XL Circle Pad Pro for NA.  I just got an XL, so now that I have a 3DS that actually has acceptable screen sizes now, I have some CPP games I really want to get back to (RE Revelaitons, Kingdom Hearts 3D, to some extent Kid Icarus Uprising since I like those Triggers better, etc.).

I'm sure Nintendo will be mainly talking about Paper Mario...because it's a Mario game.  Whatever. I'll probably pick it up, but I'm pretty much at the point where I'm not interested in hearing more about it. I'd rather see it for myself.

So Japan gets Wii U info, but North America doesn't?

Directs are better than nothing.

They will probably catch up to last european direct with Crashmo and 3ds bundles.

So Japan gets Wii U info, but North America doesn't?

In all seriousness, I wonder if Nintendo of America is just going "well, we've sold out all the Wii U stock we're going to get for the holidays, so there's really no point in talking about Wii U now. We might as well wait until after the holidays when there will be hardware to sell."

I hope there's a surprise or two. But even if there are not any surprises, show me the games, then take my money!

Also, if Nintendo or Square Enix announce a new TWEWY anytime in the future, I will be unable to buy any other games. Because I will already have given them ALL OF MY MONEY.

Damn you, Nintendo... don't you know there's a Zelda concert going on tonight?

In all seriousness, I wonder if Nintendo of America is just going "well, we've sold out all the Wii U stock we're going to get for the holidays, so there's really no point in talking about Wii U now. We might as well wait until after the holidays when there will be hardware to sell."

Actually, a whole lot of this.  It seems when Nintendo announces stuff too far in advance, people get antsy and pissy about it.  This way, they get to avoid that and shock folks with surprises. :D

Well, at least we should find out what the 3DS XL holiday bundles are going to be.  Probably white with Mario Kart 7 downloaded like Europe, and pink with Style Savvy.  I'm hoping for a Paper Mario bundle though.  I need some WiiU 2013 information though, just ONE Nintendo-developed title that's new and exciting (and Pikmin doesn't cut it for me).

I really hope Nintendo of Europe decide to release Spin Cycle on the 24th Dec. I played the original Hydroventure when it was released in Europe on Christmas Eve and I have very fond memories of making hot chocolate, putting on my slippers, and playing the game for the first time. I wouldn't mind reliving the experience with Spin Cycle.