007 Legends Headed to Wii U

The past and present of James Bond will collide on Wii U. 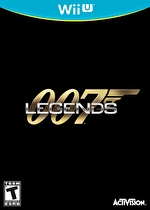 007 Legends will be released on Wii U. The game features voices from past and present James Bond characters such as Daniel Craig, Michael Lonsdale, Naomie Harris and Richard Kiel. It was previously revealed for release on competing platforms in July, but was confirmed this morning to be headed to Wii U as well.

The game will tie together five previous Bond movie-inspired stories, and also reach forward to the upcoming James Bond film releasing in theaters this fall, Skyfall.

The game is set to release on competing platforms in mid October, but no release date for the Wii U version of the game has been announced.

You can visit the official website of the game to learn more.

I hope Eurocom (who also developed the Wii game) keep the stealth mechanic they employed.  It was fantastic, the most fun stealth FPS stuff I've ever played.

Very happy this game is coming to Wii U. Love it.

LOL at having voice acting from Richard Kiel. His character, Jaws, said a grand total of one line at the end of Moonraker, the second of the two movies in which the character appeared: "Well, here's to us."

Really, they're touting bringing him in for voice acting? Really?

Nice. Bond fan right here.  ;D  I do hope they release this early 2013 though. With getting Zombi U and Black Ops 2 at launch that's a lot of FPS gameplay. Also it will just get overshadowed the same way Goldneye 007 was on the Wii.

Thank god! I was really pulling for this game to come to the Wii U, especially when  I was so heartbroken to find out it wasn't coming to the Wii!

If it's any bit as good as Goldeneye 007 (Wii) then I'm sold. I will be disappointed though if they don't use 'mote/nunchuk controls..

Why does this game's lighting look so bad? It looks bad on the 360/PS3 version too.

Yes!  This is great news.  I was worried a few months ago when one of the game trailers came out and didn't reference Wii U.