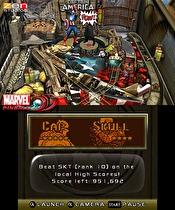 Marvel Pinball 3D is releasing this Thursday on the 3DS eShop in North America and Europe for $7.99 and €7.00 respectively.

Zen Studios is still expecting to release DLC for Zen Pinball 3D and Marvel Pinball 3D, though there are not any firm plans set. According to Mel Kirk of Zen Studios during our interview at E3 2012, they have the capability to do it, but they are still working out their strategy for it.

Nintendo 3DS owners will be able to download Zen Studios’ critically acclaimed pinball game starting June 28, 2012 in North America for $7.99 and in Europe for €7.00. Marvel Pinball 3D features four exciting Super Hero tables based on characters from the Marvel Universe, and is now in stunning stereoscopic 3D.

- Live a day in the life of the Marvel Universe’s favorite genius billionaire playboy philanthropist on the Iron Man table! Tony Stark literally suits up in his Iron Man armor to combat infamous foes like the Mandarin, Whiplash and Ultimo.

- Join Blade and Hannibal King in New York to fight off the vampiric forces led by Deacon Frost. Special lighting effects switch between day and night, so be sure to regenerate during the day in order to prepare for the battles after dark.

- Rally the troops and prepare to help Captain America and the Howling Commandos defeat Baron Zemo and the Red Skull, as you fight to control the power of the Cosmic Cube.

- Take on Doctor Doom alongside the Fantastic Four. Mister Fantastic, the Invisible Woman, the Thing and the Human Torch are extra fantastic in beautiful 3D!

I'm excited for this as I loved the Marvel themed pinball games from Zen on PS3. Although the original Zen 3D Pinball is a fun game, I wish I had waited the couple days to purchase the Marvel version first instead (just bout Zen 3D this weekend).

As an owner of Zen Pinball on 3DS I would really have liked the option to buy individual tables as DLC. I'd like another table or two, but I don't really want to spend that amount again for another four tables. It's unfortunate.

As an owner of Zen Pinball on 3DS I would really have liked the option to buy individual tables as DLC. I'd like another table or two, but I don't really want to spend that amount again for another four tables. It's unfortunate.

I'm kind of torn here.  Loved Zen Pinball 3D and have no reason to doubt that Marvel Pinball 3D will be anything but good... but think I'd rather get DLC content (hopefully picking individual tables) for the original game instead of buying a separate game and splitting time between them.  The current lineup of Marvel tables doesn't really appeal to me either.

If this is as fun as Kirby's pinball or the Pokemon pinball game, I would honestly be sold!

I'm excited to play these, but I'm upset about the fact that these tables could have been dlc for Zen Pinball. Now I'm going to have two games from the same developer that are essentially the exact same game. I'm still going to enjoy the tables, but maybe in the future things like this could be worked out better.

To people who are familiar with these tables from PSN...  would you choose the original 4 Zen 3D tables or the 4 chosen Marvel 3D tables, if you don't really care about the Marvel license? I'm not a huge comics guy but if the Marvel ones are more evolved/more fun overall, I'd go for the new game.  Otherwise, I might finally just dl the original.