Add a few more to the pile. 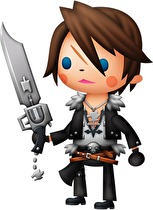 The tenth set of DLC for Theatrhythm Final Fantasy is being released this week on June 13 in Japan. The four tracks, which are listed below, will be available for 150 yen each.

Theatrhythm Final Fantasy was released in Japan on February 16 and is set to release in North America on July 3. For more information about the game, feel free to check out my review or the latest set of impressions from the English build.

and we complain about activision.