Castlevania: Lords of Shadow - Mirror of Fate Confirmed for 3DS 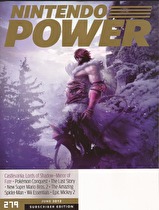 It stars Trevor Belmont, and players will use the character's version of the Combat Cross. The focus seems to be on combat, with a wide variety of abilities ranging from different secondary weapons and magic to grappling. There will be some form of RPG-esque gameplay, as players accrue experience points that can be used to unlock new combos.

Whether or not the game is more like Symphony of the Night or more like Super Castlevania IV is unknown, but from the early word, it seems like Mirror of Fate will have more in common with older, less exploration-focused Castlevania games.

Awesome. Looking forward to hearing more. My initial impression: long title is long. Also, it's interesting that they're using an existing Belmont's name.

So this game will star a new version of a character from the old universe but take place in the new universe? Correct?

That's the way I understood it. I'm confused though. I thought Gabriel was the only Belmont in the reboot canon and he didn't have any children. I'll have to double check. I don't remember a lot of Lords of Shadow's backstory.

YES. YES! YES!!! I was just starting to tire of the exploration Castlevania games. Now, they just have to fix my main gripe with Lords of Shadow - the music. Give me some classic Castlevania style tunes, not just ambient orchestral stuff.

Can't believe you guys are talking about Castlevania backstory and canon; I've never been able to care about the half-baked stories. For me, it's all about good gameplay - a common staple for the majority of the Castlevania series.


Very excited to learn more about this game.  Was Lords of Shadow any good?

Wait, so you never played Lords of Shadow but you're wondering why we're talking about its backstory? Lords of Shadow reset the entire series and the story is actually pretty good. If you have a chance, check it out! Lords of Shadow was a great game. I don't know if you have a PS3/360. If not, maybe you'll get your chance if the game gets ported to the Wii U.

That's the way I understood it. I'm confused though. I thought Gabriel was the only Belmont in the reboot canon and he didn't have any children. I'll have to double check. I don't remember a lot of Lords of Shadow's backstory.

Well, technically in Lords of Shadow "Belmont" is just a name of the mountains given to Gabriel, so he could be from a completely different lineage than Trevor.

As for the new game, I'm glad to see that Konami isn't abandoning the Lords of Shadow timeline and are extending it to the handheld games.  I'm still waiting on a double-circle pad model to get a 3DS (if I do at all), but this game intrigues me.

That's needlessly complicated. Why even call him the new protagonist Belmont? Weird.

Yeah, it's a strange narrative choice but I think they were setting themselves up to create the genesis of the family line, and that was just their rationale for the name.  There was a time gap between the end of Lords of Shadow and the Epilogue that would allow him to have children, but unfortunately the DLC just tossed that completely aside.  Now it's probably more that "Belmont" was an honorary name of sorts.

So this pretty much confirms IGA has been demoted to Konami's overnight janitor.  Well at least Aria and Dawn of Sorrow gave a conclusion to that series storyline so it isn't that big a deal if they never go back to it.  Of course I would have liked a game based on the year 1999 where Julius killed Dracula for good but IGA had his chance and blew it so there's not much left to say.

Wait, are we sure that the 3DS game ISN'T Lords of Shadow 2?

Wait, are we sure that the 3DS game ISN'T Lords of Shadow 2?

I actually just read that, too. Was coming back to acknowledge my foolishness. :P

Should they continue down the Metroidvania route I'd really like them to focus on level design. As much as I enjoyed Order of Ecclesia it didn't seem like the platforming or enemy placement was all that thoughtful. I tend to come at Castlevania from the perspective of someone who loved both Super Castlevania and Super Metroid, and as such the DS games have tended to fall between the two for me, neither being particularly good platformers nor exceeding the heights of the genre set by the Metroid series. Perhaps those are unfair comparisons, as the DS Castlevania games were certainly good in their own right, but they never really excited me in the way those games on the NES and SNES did.

I just hope they don't use the design from Castlevania Judgment.

I just hope they don't use the design from Castlevania Judgment.

I don't see why they would considering this isn't a fighting game and it's actually being made by a competent developer with a decent Castlevania game under their belt already.

I'd imagine Mirror of Fate will use Lords of Shadow's design.

I wonder if MercurySteam will port the original Lords of Shadow to Wii U. I bought the Limited Edition on PS3 but I may double dip if save files in all 3 games (assuming LoS 2 comes to Wii U) connect to each other somehow.

I wonder if MercurySteam will port the original Lords of Shadow to Wii U. I bought the Limited Edition on PS3 but I may double dip if save files in all 3 games (assuming LoS 2 comes to Wii U) connect to each other somehow.

I really think they have to at this point, considering how Lords of Shadow ends.  I suppose they could have some sort of recap at the beginning of Lords of Shadow 2, but while Lords of Shadow doesn't have the most complex story there's a fair amount to cover there.

According to Nintendo Power, Mirror of Fate picks up 25 years after Lords of Shadow and leads right into the sequel so they don't have to port the game as there's probably a cutscene that brings players up to speed but it sure would be nice of them for those who didn't get a chance to play it on PS3/360.

This is why I am betting that all the games that Wii only owners have missed in the five years will be ported to the eShop of the Wii U.

This is why I am betting that all the games that Wii only owners have missed in the five years will be ported to the eShop of the Wii U.

Yeah, that's not going to happen.  If Sony and Microsoft can't accomplish such a feat, Nintendo sure as hell won't.  The Wii U will probably have more than its share of ports from cash-desperate and lazy developers, but if you want to play what you've chosen to miss out on this generation you'll probably need to actually buy another console.

I think it's a pretty bad sign if we start getting a lot of last gen ports. If Nintendo wants to establish that the Wii U is better than the 360 and PS3, the way to do that isn't to have a bunch of ports of games that came out on those systems years ago.

I saw some scans. Why, yes. Yes, more of that, please.

According to GoNintendo, it looks like they'll be headed down the "exploration-based" route again. :( I suppose it'll be interesting to see how MercurySteam handles this different than Igarashi's team has in the past. Also, at some point, you'll be able to play as Simon Belmont. Interesting.

I haven't played Lords of Shadow yet, but the handheld Castlevania games have always had an abysmal mess of a storyline, so I've been conditioned to pretty much ignore the story of any game in the series.

The scans I saw looked pretty and with a 3 dimensional camera angle on 2D action. Get Ready, Other M lovers!