Lots of extra goodies will come in this box set. 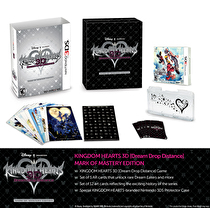 When Kingdom Hearts 3D launches on July 31 in North America, a Mark of Mastery Edition will be available as well, according to Square Enix.

This special edition of the game includes a Kingdom Hearts magnetic box, a 3DS skin cover, 12 art cards, five AR cards, and of course, a copy of the game itself. The AR cards can be used to unlock rare dream eaters, such as Meowjesty, Frootz Cat, and Kab Kannon.

Kingdom Hearts 3D will be released on July 31. The Mark of Mastery edition of the game will be available for $54.99.

LOS ANGELES (May 16, 2012) – Square Enix, Inc., the publisher of SQUARE ENIX® interactive entertainment products in the Americas, today announced the Mark of Mastery Edition for the North American launch of KINGDOM HEARTS 3D [Dream Drop Distance]. Scheduled for release on July 31 for the Nintendo 3DS™ system, the box set will be available for $54.99.

The series’ first collector’s edition for the North American market is housed in a KINGDOM HEARTS-branded magnetic box. It will include a copy of KINGDOM HEARTS 3D [Dream Drop Distance], a branded clear hard case skin cover and 12 art cards. It also contains five augmented reality (AR) cards that allow players to unlock rare Dream Eaters such as Meowjesty, Frootz Cat and Kab Kannon, and a 360° viewing stand that allows players to take a closer look at their Dream Eaters from all angles. The Mark of Mastery Edition is an excellent opportunity for fans to commemorate the groundbreaking franchise’s 10th anniversary.

Peordered it right after I saw this. Now I just hope I can finish the series before it comes out. I was making decent progress, but then Diablo III came out... :'(

If you preordered it at GameStop, they'll gladly move over the funds you already have on the regular copy to the special edition. Otherwise, if you ordered it online, you won't be charged until it ships, so you should be able to cancel your order and order this.

So it is confirmed you can get this edition in gamestops in North America? I checked their website and I only see the standard edition on there. Usually they're pretty quick to add these things but maybe this is just an exception.

Considering this is called a "Mark of Mastery" Edition, I find the lack of some sort of included Keyblade-related trinket perplexing.  Maybe that'll be one of the AR Cards.

Will the Mark of Mastery edition be available to buy in-stores on/after July 31, or is it only online? If it isn't, I think I'll have a good cry because it's sold out on all websites...