Nintendo of America Given Freedom When Localizing Kid Icarus: Uprising 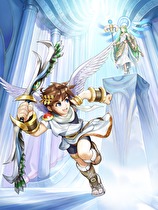 Kid Icarus: Uprising's acclaimed script may have originally spawned from Director Masahiro Sakurai's pen, but Nintendo of America's localization team was allowed a lot of flexibility, according to Sakurai in an interview with IGN.

"[The Japanese script] is something that takes advantage of the nuances of Japanese conversation, and not all of it works directly in English," Sakurai said. "We had NOA handle the localization, and I told them to change the meaning and content as much as they want - that I wanted conversations that sound natural and enjoyable to a native speaker."

In Nintendo's previous dialogue-heavy game, Metroid: Other M, Director Yoshio Sakamoto had a heavy influence in the game's localization, or at the very least, the crucial selection of the voice actress for star Samus Aran. It appears that Sakurai's method of letting Nintendo of America's Treehouse localization staff run free worked out better than Other M's divisive story.

Sakurai also confirmed that he would likely not do a sequel to Kid Icarus: Uprising in the same interview.

I imagine the version we got in English speaking Europe was also the Treehouse version. If so, I'd just like to recommend that they be given free reign in the future too. Uprising was without a doubt Nintendo's best attempt yet at a fully voice acted game (Star Fox 64 has it's own likeable cheesiness, but only in retrospect). I don't dislike Other M as much as others, but even I can acknowledge that it is completely blown away by Uprising in the story, script and VO departments.

Story? Nah. Voice actors and script? I'll give you that. Uprising has a fairly average story that I didn't find to be memorable.

Shows how much trust Nintendo has with Treehouse's localization. They are an often overlooked hero of many of Nintendo's titles here in the states. Games like the Mario and Luigi series, Paper Mario etc wouldn't be nearly as charming from a dialogue/writing standpoint if it wasn't for them.  Glad they were given such free reign with Kid Icarus, while I haven't played it, I heard it is wonderfully written.

Well they did an amazing job that banter was easily the best part of the game for me...well done tree house.

They did an amazing job with it...comparing it to Other M makes Uprising sound like it's just a hair better than "Baby's Cry...named for the sound that a baby makes when it wants attention"  Instead, it is quite possibly some of the best dialogue that I've heard in a game this side of Tim Schafer, or at least, the bits that I've seen on Youtube (I hate point/click adventure games).  As for the story, well....I think it's memorable, though not in an "Lord of the Rings/Game of Thrones/Mass Effect" Epic-Story-Lotsa-Characters-Crap-Blows-Up kinda way.  It's very campy and very funny.  Not unlike...say, Spaceballs, whose plot I remember more than than the original Star Wars.

I think the story itself is not very memorable because its just a vehicle to go places.  The banter and the levels themselves are the focus.

Makes you wonder why this isn't done for ALL games at ALL times WITHOUT EXCEPTION.
**glares at photo of Sakamoto**


Trying to translate Jpse to English is liking putting round pegs in square holes. Does. Not. Fit.

Nintendo of America Given Freedom When Localizing Kid Icarus: Uprising

THESE COLORS DONT RUN AT THE NOA TREEHOUSE YEAH THATS RIGHT. I need to go listen to the Team America sound track.

"We had NOA handle the localization, and I told them to change the meaning and content as much as they want - that I wanted conversations that sound natural and enjoyable to a native speaker."

And you know, thank God for that. I do find it hilarious when I see threads about people complaining about how Uprising's translated script is not true the original Japanese script and how horrible it is and OMG INTERNET DRAMAAAA.