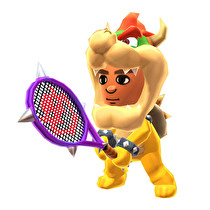 In a recent issue of Nintendo Power, Hiroyuki Takahashi, the producer and lead designer of Mario Tennis Open, explained why the 3DS title lacks the RPG elements of its handheld predecessors.

When asked why Mario Tennis Open lacked an RPG-style single-player mode similar to the ones included in Mario Tennis for the Game Boy Color and Mario Tennis: Power Tour for the Game Boy Advance, Takahashi replied with, “This version may be for a handheld system, but we approached it like a console title. With aspects like download matches and online matches made possible by the hardware, the game has a feature set more similar to console games.”

Furthermore, he added that the addition of Mii characters also contributed to the absence of RPG elements, saying “Another reason is that the game's cast includes Mii characters in addition to characters from the Mario family, which are difficult to work into an [RPG] scenario. It didn't feel right to have already-existent Mii characters appear in an original storyline.”

Takahashi went on to say that “there are RPG-like elements in the form of costumes,” which he noted allow players to customize their characters and change their abilities.

Wow, that is REALLY a bullshit non-answer.

The presence of Miis prohibits the ability to add RPG elements?  Gee what perfect timing to support my "Miis restrict game design" argument regarding NSMB Wii U.

Except that doesn't make sense, because if anything having the Miis in there would make the RPG elements even better. In the previous games you created your own no-name character for the RPG side of it, so using the Mii you already have only streamlines and enhances that process. Leveling up and tricking out your own personal Mii would be pretty cool.

"This new hardware allows us to do less than ever before."

If you are going to charge $40 for these games, there should be MORE content than in previous titles.

This has less, so I will wait to pay less. $20 is the most I'll pay. I only have so much money, and you have to earn  it from me with a quality game.

I'll admit that I haven't played any Mario Tennis since the 64 (which is appalling because that game made me want to find Jesus). That said though, is RPGness really necessary for a game that is the most fun competing (read: betting) against your friends?

So don't have Miis in it then! They honestly thought the inclusion of Miis is as good as, if not better, than an RPG storyline? They really must get a kick out of playing as a weird bobble headed thing that kinda looks a bit like them.

It's much like with Star Fox 64 3D - when an interviewer asked them why there was no online multiplayer, they said they wished to focus on the local multiplayer, which they then claimed was original and had a lot of work put into it. Essentially, it's the same kind of nonsense answer. What they actually mean, but are not willing to say, is that they didn't want to. Those features just aren't a priority for them.

For my part, I'm not especially gutted about the lack of RPG elements. It's still up in the air whether I pick up Mario Tennis Open (might wait until it drops to £20), though I will commend Camelot for pushing it forward in other areas.