Order Up Coming to North America as an eShop Title

It should be getting a demo on the eShop soon, followed by a full release in late May or early June. 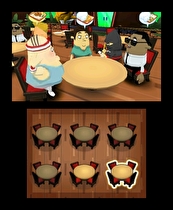 UPDATE: Order Up is coming out on eShop in late May/early June, according to publisher Ignition.

Order Up, originally planned for an early 2012 retail launch in North America, is coming to eShop on 3DS, according to developer Supervillain Studios. The game, which is completely finished, will also get a demo before its release.

"[Order Up] is now coming exclusively to the 3DS eShop as a download, "Supervillain's CCO/Co-Founder Chris Rausch told us. "The retail scene is brutal unfortunately, so there have been some changes in plan."

Ignition is still publishing the title on eShop, and as of now, no release date has been confirmed. Order Up came out as a retail game in Europe in December 2011. It was originally slated for a January 2012 release in North America, before being continuously delayed, first to March, then to April, and then straight off the schedule.

As for a release, Rausch wasn't sure. "I think the demo is just ASAP after Nintendo approval, and the game would follow soon after," he said.


The retail scene is brutal unfortunately, so there have been some changes in plan."

Thats cool. I hope more developers agree with this idea. I wish Crush3D was that way too. I sort of think a retail cartridge should really be worthwhile and huge experiences.

Kid Icarus, Resident Evil Revelations, Super Mario 3D or games that are so huge I wouldn't want to download cuz of file size and scope of gameplay is worthwhile to deserve a cartridge.

That's just me though