Relive the Game Gear with this week's Nintendo Download. 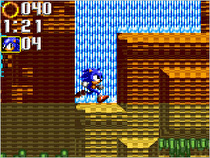 Nintendo unleashed three Game Gear titles onto the 3DS eShop, as well as a DSiWare game and a Wii Virtual Console classic in this week's Nintendo Download.

The three previously announced Game Gear titles finally made their way to the service. Sonic the Hedgehog: Triple Trouble lets players join Sonic and Tails in another Sonic adventure. The game can be downloaded for $4.99.

Shinobi, also for the Game Gear, is full of side-scrolling ninja action. You can venture forth to defeat the evil force capturing the citizens of Neo City for $3.99.

The last Game Gear game made available this week is Dragon Crystal. Fight off monsters while you make your way through dungeons in this turn-based RPG. The game is available for $2.99.

The DSiWare game, Pirates Assault, is available to DSi and 3DS owners. This pirate-themed tower defense game can be downloaded for $1.99.

I will probably get Triple Trouble sooner or later since I never had a GG and always wanted to play that game.

Also, from what I've heard, the GG emulator is a marvel unto itself.

Played a little Triple Trouble earlier. It's not half bad. $5 is a bit steep when you consider what can be had for less than that on the service, though.

I picked up Triple Trouble, if only to relive the brief period in my childhood when I owned a Game Gear. Easily the best Sonic title on the Game Gear. The music from Sunset Park Act 3 is still one of my all time favorite game tracks.