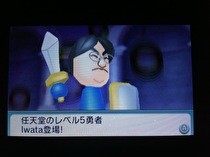 Nintendo sent a special gold pants version of Satoru Iwata’s Mii to Nintendo 3DS owners in Japan this morning, February 26. Users were sent a message in the Notifications section informing them that someone has arrived in the Mii Plaza. After going into the Mii Plaza, the gold pant-donned Satoru Iwata introduces himself letting you know that his most recently played game is Mario Kart 7. This special Mii has all of the puzzle pieces in Puzzle Swap and is level 5 in Find Mii.

Nintendo 3DS users who are looking to share the special Iwata Mii (or any gold pants Mii) via QR code should note that sending the Mii to the Mii Studio causes the character to no longer be available in the Mii Plaza. He cannot be shared via QR code, and may not be recoverable if deleted.

There is no word if any special Miis will be delivered to 3DS users outside of Japan. Previously, gold pants Miis, including Iwata, were distributed via StreetPass at E3 2011. February 26, the day Iwata’s Mii was sent, marks the one year anniversary of the 3DS in Japan.


I wonder why his birthday and cat/dog preference was removed/hidden though?

Man, Japan gets all the goodies!  America gets no love.  :'(

I found the sharing thing out the hard way. I was going to send Iwata over to my Mii Studio to give him to friends and also post it in this article. But nooooooo! Nintendo wants to punish me for thinking such an evil thing!

At the E3 2011 press meeting, Miyamoto said the gold-pants Mii that was circulated is the official company distributed avatar. Their personal Miis don’t necessarily wear the gold pants. However, that is still a nice Nintendo treat.

Aww, I hope Nintendo of America will be nice and send out something like this. Though I'm not particularly thrilled of getting a Reggie Mii.