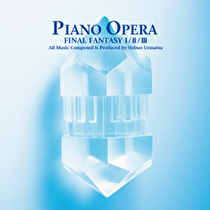 Square Enix has opened up an official portal for their Final Fantasy Piano Collections.