Future Additions to VVVVVV on 3DS Depend on Fan Support

Online leaderboards and a level editor are possibilities. 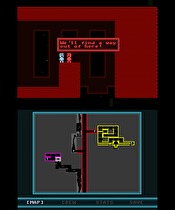 VVVVVV's 3DS edition could see online leaderboards and even the level editor if there is enough support from players.

We asked Nicalis's Tyrone Rodriguez at a recent Nintendo eShop demo event about the possibility of future additions to the 3DS version of the game. He responded, "It's depends on the players. We're considering online leaderboards and other things. If they download the game and they play it and they enjoy it and want to keep playing it, then we'll be happy to support it for the long term."

With respect to VVVVVV's level editor coming to the 3DS version of the game, he said, "It's up to the players. We'd love to have it in. We have it working. It's a big investment for the player to make a level. Sometimes people load up the level editor and never use it or just make a level with one room. It's a lot of work on our end to make it work, to test it and debug it."

The 3DS version of VVVVVV already includes the ability to load levels from the PC editor, which was released earlier this year, and ships with a wide selection of pre-made bonus levels selected from the fan community.

This is one game that I had a strange addiction to.

Online leaderboards should be standard feature set, not a feature in a future update that may or may not happen.

I just beat the game and I'm exploring the other features. I hope they do add more to it- If only to make up for the fact that Flip Mode doesn't work.