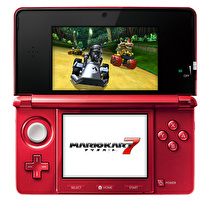 Nintendo also revealed that Mario Kart 7 would allow players to steer using the Nintendo 3DS's gyroscope. Paired with a new first-person camera perspective option, this is an entirely new way to experience the Mario Kart series.

Finally, Nintendo also used the conference to reveal two new characters for their light-hearted racer: Lakitu, in a cloud-themed kart, and Metal Mario, whose entire kart, including the tires, was metallic. The Fire Flower item was also revealed, allowing a racer to launch individual bouncing fireballs either forward or backward.

If Lakitu is a racer, who will do the countdown and wave the chequered flag?

But seriously, these are great features. As long as the online experience is as solid as the Wii game (and in the presentation, it looked like a very similar interface), all is well.

I really like the first-person perspective. I hope it has a back view mirror or back radar. Also, I hope you can use the slide pad in that perspective. An ultimate hope is that the new perspective will be a new standardized feature for Mario Kart.

I was hoping they use Streetpass for this.

I was really hoping they would put in a track that gets rained on. My Nintendo prayers have been answered.

I believe this is the first time Lakitu had been playable in a Mario game, so it should be interesting.

If Lakitu is a racer, who will do the countdown and wave the chequered flag?

The racer Lakitu had a red shell, so it will probably still be Lakitu.