Link's most popular multiplayer adventure is landing on Europe this September. 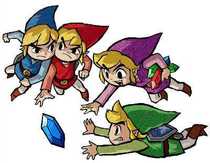 The Legend of Zelda: Four Swords is coming to the European DSiWare service this September.

Originally released in 2002, Four Swords is a multiplayer Zelda game where up to four players can connect and complete levels and dungeons as four different Links. It was included as a bonus on the Game Boy Advance re-release of The Legend of Zelda: A Link to the Past.

The game is also slated to be re-released on the North America DSiWare service for free as part of Nintendo's celebration of Zelda's 25th anniversary.

While no specific date was given for Four Swords, it will be coming to the European DSiWare service this September.

Can one person play the game or is it multiplayer only?

I have the GBA cart, and it is not accessible as a single player game. Once you start it, it searches for the game link cable. So, idk what they are going to do with the game.

Does anyone know if you can download Four Swords on 3DS for free? Or is the offer only available for DSi owners? It'd be sweet if I could download this game for free on 2 separate systems.

I can't imagine it wouldn't be available for 3DS owners.

But to answer a previous question - if this is the "same" game that was in LttP, then, no, there will be no single-player mode.  It just won't work.
Great game though.