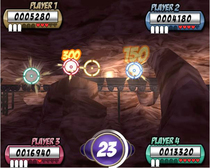 Seven new games were released across Nintendo's digital storefronts this week. The Wii and 3DS Virtual Consoles each received one game, and there were three DSiWare releases, one 3DS-exclusive eShop addition, and one WiiWare title added.

The most notable release, arguably, is Final Fantasy III for Super NES. The game, originally released in Japan as Final Fantasy VI, is considered by many to be among the finest RPGs ever released, and has been one of the most sought-after Virtual Console releases since the service launched in 2006. It tells the story of a group of rebels fighting against a dictatorship. Soon, the characters discover even more secrets behind the conspiracy, learning about themselves and the world they live in in the process. The game can be downloaded for 800 Wii Points ($8).

The other notable release for the week is Kirby's Dream Land for the eShop, the Game Boy game that introduced the world to Kirby. Resident of Dream Land, Kirby can float and suck up enemies. His most famous ability, the copy ability, however, is not in this version of the game. Nintendo has priced Kirby's Dream Land at $3.99.

Other games released this week are The Lost Town: The Dust for the eShop by Circle Entertainment ($4.99), Boardwalk Ball Toss for both the eShop and DSiWare by Skyworks Interactive ($1.99), Moto eXtreme from Chillingo Games ($7.99)  Hearts Spades Euchre for the eShop and DSiWare by Cosmigo for 500 DSi Points ($4.99) and Big Town Shoot Out for WiiWare by Performance Design Products for 500 Wii Points ($4.99).

Virtual Console™
Final Fantasy® III - Experience the fun of this extraordinary RPG franchise. Originally released as FINAL FANTASY III on the Super NES™ in North America, this game is in fact FINAL FANTASY VI from the main series chronology. (For Wii™)

Nintendo eShop
Kirby's Dream Land™ - Kirby's debut video game has been re-released for Nintendo 3DS. Someone has stolen the magical Twinkle Stars from the inhabitants of Dream Land. It's Kirby™ to the rescue. (For Nintendo 3DS)

Got Kirby's Dream Land. It's on the short side like Super Mario Land, but I still found it fun enough to recommend. Music was pretty good too.


I have a feeling that some will say that Nintendo timed the release of Final Fantasy III/VI so that it comes out almost immediately after they announce their "no plans" for the 3 Wii RPGs. Weird.  :P:

I immediately downloaded FF3/6, one of my favorite games of all time. No idea when I'll get a chance to play it.


AAAH WHY AM I GOING BALD?

Really eager to get Final Fantasy 6. Time to see if I have any unused gift cards laying around.

With they way they're doling out GB games once a week, and they still have an untapped GBC library, not to mention Game Gear and TurboGrafx16, I'm thinking that they can keep this up for a very long time, which is bringing me to my concern:

There are never going to be GBA games on the 3ds VC, are there?  I know they haven't announced this, but they haven't ruled it out, and there were rumors, but that is looking really unlikely now.  Darn it.

I'd be willing to bet that they're saving their GBA library for the VC of the next handheld generation.

Think about the Nintendo properties they've released with Link Awakening, Donkey Kong '94, Super Mario Land, etc.  Keeping at that quality they'll be at GBA quicker then you think.  Though licenses must be a lot grayer on the handhelds.

I immediately downloaded FF3/6, one of my favorite games of all time. No idea when I'll get a chance to play it.


AAAH WHY AM I GOING BALD?

I'll be picking this/CT up next paycheck.