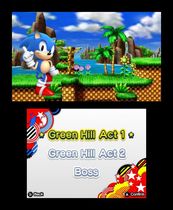 The 3DS and console iterations (appearing on Xbox 360 and Playstation 3) both feature stages that are exclusive to each version of the game. Starting yesterday, PS3 and Xbox 360 owners can download demos of Sonic Generations.

Modern and Classic Sonic together at last!

I wonder if there's any chance they'll release a demo for the 3DS version...