Players hoping to experience the supernatural RPG on their 3DS this summer might be disappointed. 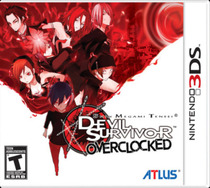 A newsletter sent by Atlus confirms that Devil Survivor Overclocked for the 3DS, once slated for a June 2011 release, has been delayed. The title now has a vague Fall 2011 release date.

Along with the delay, Atlus revealed the game's final box art.

Devil Survivor Overclocked is an updated version of Shin Megami Tensei: Devil Survivor, originally released for the DS. It is a tactical RPG where players can take control of up to four squads lead by the main characters. They summon demons into battle for support.

Well, if you really want to play this game, just buy the DS version.  It's essentially the same, but with slightly lower res graphics, without extra content, no voice acting, and it will cost you at least $50 to buy it new online, if you can find it at all.  I'm sure you don't have a problem with that, do you?

In all seriousness, I too am waiting for this.  2nd delay!  But since they have the box art now, I guess it's really coming out, right?