Also, Master Quest will be mirrored and tweaked in different ways. 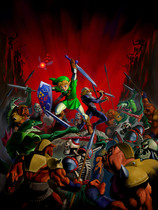 The Legend of Zelda: Ocarina of Time 3D will feature a new mode called Boss Challenge, according to a recent Nintendo of Europe press release.

The mode will let players replay boss fights one at a time, or continously. The press releases hints that it will be unlocked at a certain point in the game, but gives no clue as to whether it's after the first boss or the fifth. However, the wording does make it sound like Boss Challenge will be unlocked before the game's completion.

[EU] A Legend Returns in Magical 3D this June

Experience The Legend of Zelda: Ocarina of Time 3D in the palm of your hand, exclusively on Nintendo 3DS

19th April, 2011 – One of the most critically-acclaimed games of all time The Legend of Zelda Ocarina of Time has returned, this time in full 3D - without the need for glasses - and exclusively to Nintendo 3DS. Brace yourselves this summer as The Legend of Zelda™: Ocarina of Time 3D - a masterful enhancement on one of the landmark releases in video game history – comes to Europe on 17th June, 2011.

With phenomenally re-mastered graphics and new stunning 3D visuals, fans of the original game and newcomers alike will be able to marvel at this gaming classic to join the daring adventures of one of video-gaming’s greatest heroes – Link!

Guide Link – a young boy who is tasked with saving the land of Hyrule from Ganondorf, the Gerudo King of Thieves. The evil Ganondorf is intent on gaining mastery both over the land of Hyrule and time itself and he is led by his ambition to overthrow the current Royal Family of Htrule. It is up to Link to stop him in his tracks as you guide him on a magical journey through time. Explore vast landscapes, mythical temples, dungeons, towns and villages, as well as interact with many different characters and battle various enemies – all in stunning 3D.

The game’s original control scheme has been completely re-designed to fully make the best use of the capabilities of the Nintendo 3DS system. Players will be able to control Link by utilising the Circle Pad whilst the Touch Screen of the Nintendo 3DS is used to assign items, check maps and ensure that Link is wearing the appropriate equipment  - all in a fresh and intuitive way. Players can also take advantage of the in-built gyro sensor of the Nintendo 3DS; the implemented motion controls allow you to look around your environment when in first person perspective simply by physically moving the Nintendo 3DS system.

Not only does the fully-3D gameplay experience provide easier in-game navigation, but an improved and intuitive interface gives you better control as you solve puzzles, travel through time and explore the immersive land of Hyrule. Players not so familiar to the Legend of Zelda series can also get a helping hand through bite sized videos available in-game which will provide hints on how to solve puzzles encountered during your journey.

Fans of the original game will be pleased to know that The Legend of Zelda: Ocarina of Time 3D also heralds the inclusion of two brand new additional challenges not available in the original game; Master Quest and Boss Challenge.

Master Quest mode will see some surprising changes to the game. Puzzles will have to be thought about and solved in new ways from the main Story mode, whilst items and enemies will be found in different locations. The land of Hyrule has also been reversed as locations are mirrored - so what would ordinarily have been on the right now appears on the left and vice versa. Enemies will also prove more difficult to beat, and as such the greater complexity involved in this new Master Quest will test the gameplay abilities of even the most seasoned fans and prove a new experience for all.

The new Boss Challenge mode acts as an extra treat for those players who reach a certain point within the game. It will provide players with the opportunity to face any of the previous Bosses they have defeated once again, or, the option to face and confront them one-by-one, all in a continuous battle.

The game’s graphical re-working coupled with the three-dimensional depth provided by your Nintendo 3DS breathes new life into this timeless classic. Whether you're a first-time player or a regular visitor to Hyrule, the engaging, immersive gameplay features of The Legend of Zelda: Ocarina of Time 3D offers a magical new adventure for all.

The Legend of Zelda: Ocarina of Time 3D launches across Europe, exclusively for Nintendo 3DS, on 17th June, 2011.

Look out for more titles and release dates as they become available via the official Nintendo website at: www.nintendo.co.uk/zelda

That could be interesting. Provided it's a time attack mode with (possibly) leaderboards, it could be a welcome addition.

Already the Boss Challenge mode that I might find appealing.  Especially if they don't just keep throwing them at you but do a more progression feel to it and give stats.  So I kill one boss they give me my time, damage taken, items used, and a grade. I walk into the next room to do another be a tower or something.  Have a mode where I can decide to be refreshed after each battle or just a straight come how I am mode that doesn't refill my life etc. after each.  Let me break this up a bit.  First off if you ever played the continuous type modes in DDR you'll know there is one where you just do one after the other but beyond that it’s the same then there is another where your only allowed 3 mistakes.  What I like to see in this mode is.

I would have it so you could do all these modes as Link and if you do some certain thing unlock using Sheik for these modes.  I also have all these modes plus the ability do them local wireless coop.  That probably be something I be interested in.  Especially if they start borrowing from some of the other games for these.  Ball and Chain anyone?

Edit:  Fixed Spelling errors from lack of a Personal Crimm.

It got dug out.  Trying to see who really reads those Press releases.

If you don't get European press releases...

If you don't get European press releases...

I thought NWR did with Greg and all that.

For some reason I thought the dungeons in the Master Quest version already were mirrored. I guess I'm thinking of something else.

For some reason I thought the dungeons in the Master Quest version already were mirrored. I guess I'm thinking of something else.

I don't think there are many other surprises hidden in this game, but even still, this should be a really boss game.

I know the Wii version of Twilight Princess was mirrored from the GameCube version so Link would hold his sword in his right hand like most players would and they wouldn't have to redo any animations.  Maybe that's what you're thinking of, because I've never heard of any of the other games being mirrored.

I know the Wii version of Twilight Princess was mirrored from the GameCube version so Link would hold his sword in his right hand like most players would and they wouldn't have to redo any animations.  Maybe that's what you're thinking of, because I've never heard of any of the other games being mirrored.

Yeah I think thats it.

Man, this is the only thing making me really want to get a 3DS sooner than later.  All the talk about OoT on podcasts recently has been making me very nostalgic.

I knew that it wouldn't be part of this game as a bonus, but I would still like to see Majora's Mask get a release.  I've never had the patience to play it to completion on a console, and I don't think that I could play it on the console with my current time/schedule constraints now given it's game structure.  I think I could very well play it on a handheld, though.