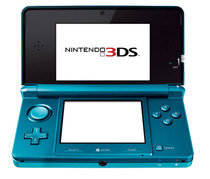 Charlie Scibetta, Nintendo's senior director of corporate communications talked to Joystiq about the new 3DS eShop. The 3DS eShop is an online marketplace where 3DS owners can purchase and download games. Scibetta revealed to Joystiq that most of the DSiWare library will be available from the launch of the new eShop.

As for people who have old DSiWare already downloaded to their DSi, there will be a way to transfer old downloaded games to the new 3DS. Recently, there have been rumors spreading about how players could only transfer a certain number of games. It has now been announced that there will be a limit to how many times a game can be transferred from one device to another, but no limit on how many games.

In addition to the library of old games, the eShop will also have  the Virtual Console which is a library of old games with some that have been rendered in 3D or have certain 3D elements added to them. Scibetta adds "Anything that's rendered in 3D, converted into 3D, is called 3D Classics, but we don't have any other terminology yet." There has been no word yet if there will be original and entirely 3D games available for download yet.

Still no mention of exactly how they will have us transfer DSiWare games to 3DS?

Perhaps a wireless form of communication or something to do with the Wii?


This is a rough overview of the system OS.  If you'll skip to 5:53 when he enters the Settings menu, he shows a section with a "button" that will activate the connection between the 3DS and the DSi.


The transfer would be a direct interaction between the devices, no middle-man (er, machine) required.  What we don't know is the part of the process where the user will ID the DSi their 3DS will be communicating with.