Nintendo producer name drops in a discussion of overseas collaborations. 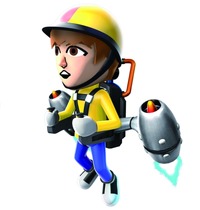 In conjunction with North American developers, Tanabe has overseen the revival of several classic Nintendo franchises, such as Punch-Out and Donkey Kong Country. The PilotWings franchise has not been visited since PilotWings 64 on Nintendo 64.

Good to hear that the development team is still getting work. They have been awfully quiet since ExciteBots.

I did this video:


It compares Pilotwings Resort with Wiisports Resort. Monster games has damn talent both games look identical to me.

I must admit I don't think I've ever played Pilot Wings...but this hurts. Monster games is an awesome team, I think Excite Truck (still haven't played Excite Bots for some reason) is definitely in the top 5 Wii games.