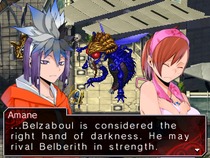 One of the additions is the inclusion of voice acting for the entire story. Also, the tactical RPG will feature a special 'eighth day' chapter as a treat to fans. The graphics will also have some enhancements with the art in particular looking sharper on the 3DS's new screens.

Considered one of the best RPGs of 2009*, the original Devil Survivor presented gamers with a novel premise: Tokyo is in full lockdown, the government's swift, coldblooded response to a surprise demon invasion.  While you and your friends must solve the nature of the interdimensional rift through which the horrific creatures are entering your world, saving the world is not your highest priority; staying alive, on the other hand, is.

SMT: Devil Survivor Overclocked is currently scheduled to launch on Nintendo 3DS in Summer 2011.  More details will be made available at a later date.  Look for the game's official website to launch at http://www.atlus.com/devilsurvivor3ds.