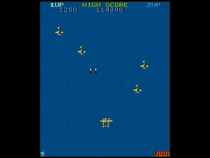 First off is Jam City Rollergirls for WiiWare. You may have read our interview with developers, Frozen Codebase. I'm personally terrified by roller derby, so this might just be me, but Texecutioners should not be the name of a team in any sport. However, if you're curious about the derby you can create your own derby girl and set out on a campaign of skating and skull crushing for 1,000 Wii Points ($10).

Next we have a pair of WiiWare demos: Gamelion's Furry Legends, a physics based platformer where your stated objective is to save Furland and its Furball residents from the evil Lord Squire, and Abylight's Fish 'em All, a game where you catch fish (thankfully without puns). Both demos are available for 0 Wii Points ($0).

Lately, if it's Virtual Console it must be Capcom arcade titles, and indeed this week we have two. First is the arcade classic 1942. A vertical shoot-'em-up, this game forced players to face the uncomfortable reality that they are playing as an American fighter pilot who is tasked with destroying Japanese air command in a game made by a Japanese company. Second is Black Tiger, an action platformer where you play as a barbarian. The game feels an awful lot like Ghosts 'n Goblins, which Capcom had released two years earlier. Both games are 800 Wii Points ($8).

First is Airport Mania: Non-Stop Flights, from Lemon Games. It's an air traffic controller game; a seat in this tower will cost you 200 Nintendo DSi Points ($2).

Next is Rocks N' Rockets from TikGames, LLC. In this descriptively-titled game you shoot rockets at meteors falling towards the Earth. Over 100 stages of Rocks + Rockets can be yours for 500 Nintendo DSi Points ($5).

Third is Digger Dan & Kaboom, from Virtual Playground. Digger Dan is a miner, and he's mined lots of gems. He and Kaboom, his pet gopher, need to extricate them from his mines. Gem removal will run you 500 Nintendo DSi Points ($5).

The final game is Ante Up: Texas Hold'em, from MonkeyPaw Games. Always a hotbed of simulated gambling, DSiWare's latest gambling title lets you pick from a list of "realistic portrayals of uncanny casino characters" to be your avatar. That description seems questionable as "elderly woman latched to slot machine" was not listed as one of the choices. Minimum bet at this table is 500 Nintendo DSi Points ($5).

When it comes to downloadable games for the Wii™ and Nintendo DSi™ systems, you never know what each day might have in store. One minute you'll be throwing elbows and speeding around the track in Jam City Rollergirls for the WiiWare™ service. Next, you'll travel back in time for classic arcade-style air battles in 1942 for the Virtual Console™ service. Then it's back to the present, where you've got to stay cool under pressure as an air traffic mastermind in Airport Mania®: Non-Stop Flights for Nintendo DSiWare™. Just when things start to settle down, Rocks N' Rockets will inspire you to step up and fight off an onslaught of deadly meteors using your Nintendo DSi stylus. With hundreds of downloadable titles to choose from - plus demo versions of select WiiWare games for zero Wii Points™ - you'll never face another humdrum afternoon again.

Jam City Rollergirls
Publisher: Frozen Codebase
Players: 1-2
ESRB Rating: E10+ (Everyone 10 and Older) - Animated Blood, Comic Mischief, Mild Violence
Price: 1,000 Wii Points
Description: Blast off into the wild world of roller derby. Lace up your skates and join up with real-life roller derby teams the Texecutioners, Dairyland Dolls, Brewcity Bruisers, Rat City Rollergirls and Gotham Girls Roller Derby as they skate hard and hit harder in a battle for flat-track dominance. Create your own custom roller derby skater and level up as you progress through the season, or play as one of the readymade stars of the Women's Flat Track Derby Association. Choose from five tracks and skate forward, backward, by yourself or with a friend. Skaters, refs, fans and gamers will be thrilled by the fast, furious game play.

Furry Legends (demo version)
Publisher: Gamelion
Players: 1
ESRB Rating: E (Everyone) - Comic Mischief, Mild Language
Price: 0 Wii Points; full version available for 1,000 Wii Points
Description: The legend starts here. Play Furry Legends, a dynamic platform adventure with the most fur you've ever seen. Start the crazy adventure and solve fun, physics-based puzzles in a fantastic 3D world called Furland. Furland is a humorous and weird place, populated by funny creatures such as five-eyed crabs, round cows, crazy rabbits and, of course, the lovely Furballs. The player controls fluffy characters with special skills such as the ability to manipulate time, which can influence the physics-driven environment. Save the Furballs from their doom and keep Furland safe from Lord Squarie.

Fish'em All!™ (demo version)
Publisher: Abylight
Players: 1-2
ESRB Rating: E (Everyone) - Mild Cartoon Violence
Price: 0 Wii Points; full version available for 800 Wii Points
Description: Here's an arcade game with real coin-op flavor. Jack and Walter are two old fishermen in a fantasy world. They have found places where crazy fish leap out of the water all day long - the perfect place for a spot of fishing. It's a shame the other strange creatures aren't going to make things easy. In this surreal action game, you will experience the excitement of the great arcade classics on your Wii console. Hold on tight to your Wii Remote™ controller and fish 'em all. The game features nine colorful scenarios and three game modes. In Arcade mode, catch as many fish as possible within the time limit. In Challenge mode, note how many fish of each color you need to catch. In Fishtris mode, match three or more fish of the same color to make them disappear.

Note: Some demo versions do not support all game features, and players cannot save their in-game progress in demo versions.

BLACK TIGER™
Publisher: Capcom
Players: 1-2
ESRB Rating: Everyone (Everyone) - Fantasy Violence
Price: 800 Wii Points
Description: Fight your way through colorful, action-packed levels in this 1987 arcade classic. Explore huge, sprawling levels as a powerful barbarian seeking to defeat menacing bosses. Plus, upgrade your character with one of the first inventory and power-up systems ever built.

Airport Mania: Non-Stop Flights
Publisher: Lemon Games
Players: 1
ESRB Rating: E (Everyone)
Price: 200 Nintendo DSi Points™
Description: Hundreds of airplanes are on their way to your airport. In Airport Mania: Non-Stop Flights, you'll face the challenge of coordinating an endless number of incoming flights for as long as you can. You'll need to care for each plane by bringing it safely to the airport. Send each one to a gate to drop off and pick up passengers, then schedule them for a runway to ensure an on-time departure. Doing all this will maximize both customer satisfaction and your score. Upgrade your airport at any time to make sure you're ready for every color and type of plane. Enjoy frantic time-management action with an airport twist that you won't want to miss.

Rocks N' Rockets
Publisher: TikGames, LLC
Players: 1
ESRB Rating: E (Everyone) - Mild Fantasy Violence
Price: 500 Nintendo DSi Points
Description: Are you ready to take the hero's seat in this mesmerizing arcade game? Civilization is threatened by a terrifying, multi-phased meteor attack - thousands of strange meteors are heading toward Earth. Your mission is to protect our cities by controlling a rocket launcher that is built to protect each city. Experience waves of increasingly destructive meteors, innovative power-ups and more than 100 exciting levels.

Digger Dan & Kaboom
Publisher: Virtual Playground
Players: 1
ESRB Rating: E (Everyone)
Price: 500 Nintendo DSi Points
Description: Digger Dan has always loved digging. That's probably how he got his name, although nobody knows for sure. He also loves gems, and he just happens to have found a ton of them. However, all of the gems are in some pretty nasty caves, so you're going to have to help Dan get them out. Dan has sent Kaboom, his pet gopher, into the caves to find the best place to start, but he hasn't returned. Kaboom has a habit of falling asleep, though, so it looks like Dan is going to have to rescue him too.

Ante Up: Texas Hold'em
Publisher: MonkeyPaw Games
Players: 1-8
ESRB Rating: T (Teen) - Simulated Gambling
Price: 500 Nintendo DSi Points
Description: It's time to let your inner gambler get a turn at the table. While poker has always been a part of Western culture, the ease and accessibility of Texas Hold'em has brought the game to the masses, whether on TV or in casinos. Ante Up: Texas Hold'em makes poker fun portable with realistic mechanics and a compelling story to keep you stimulated and playing for hours. The game is graphically superb, and the players are realistic portrayals of uncanny casino characters. Choices include an undercover vice cop who practices what he patrols and an aspiring actress with a daring streak. You'll find 12 characters in all. Best of all, the game is based on the authenticity of poker and the algorithms that produce a natural falling of the cards. You'll swear you're in Vegas as you face the pressure of making a call or daring a bluff while your money sweats it out on the table.

Come on guys, I slave all day to make fun of the downloads and then subject one of our poor staffers to make it professional enough to not get us barred from industry events. At least you could enjoy our...well their hard work.

Loved you write-ups, James. Especially the Texas Holdem old lady comment. After your descriptions, I didn't need to bother with the boring ol' press release.