Players that pre-order Sora's latest adventure will receive a special item for their DS. 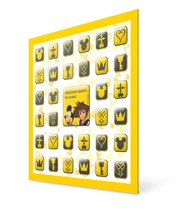 Square Enix announced today a special pre-order offer for Kingdom Hearts Re:coded for the DS. Players who reserve the game on Gamestop or Amazon will receive a set of 32 DS decals. Kingdom Hearts: Birth by Sleep for the PlayStation Portable also received a similar offer.

Kingdom Hearts Re:coded originally started its life as a game for mobile phones in Japan. The DS port will include enhanced graphics, new gameplay modes and features, and new cutscenes.

The title will be released in North America on January 11, 2011.