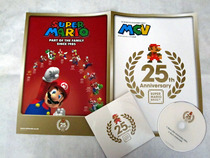 Today marks the 25th anniversary of the Japanese release of Super Mario Bros. While the Mario character has appeared in arcade titles prior to this date, Super Mario Bros. is what brought us the plumber's land of green pipes, koopas, goombas, and mushrooms.

Here we take a look at some of these promotions and campaigns taking place worldwide.

In Japan, Nintendo's official site has details for an anniversary campaign, where over 10,000 people will win Mario merchandise through a Club Nintendo raffle. There are tote bags, t-shirts, and playing cards on draw for anyone who purchases an eligible Mario title from today until January 10, 2011 and registers the game with Club Nintendo.

A special edition of Iwata Asks minus Iwata has been posted, titled Shigesato Itoi Asks Instead of Iwata: Super Mario 25th Anniversary Asks. As Satoru Iwata and Shigeru Miyamoto have discussed the Mario series so often, Shigesato Itoi takes his place as interviewer to bring a fresh perspective. Itoi is most famous in Japan for his copywriting work for advertisements, and his work as a creative director for games. He is the creator of the Mother/Earthbound series.

Itoi Asks is the first installment of a special Iwata Asks series for the anniversary campaign. In the past, Iwata was interviewed by Itoi for his website, "Almost Daily Itoi News". He was very impressed with the rich information that was contained in the interview due to Itoi's interviewing skills. This is one of the reasons Itoi was chosen to ask Miyamoto about 25 years of Mario history. The article is very long and in-depth, covering the following topics.

1. What can't be said with words.
2. "You're a pretty negative one, aren't you?"
3. "Alright, shall we head in that direction then?"
4. Write why it's wrong on the label.
5. If the timing is off, it's all off.
6. Making everything as straightforward as possible.
7. Presentations in 2 points.
8. Input is loose.
9. What's standard for a consumer.
10. Making sure that everything plays out accordingly.
11. Has "Mario" continued without a hitch?
12. What engrosses players 25 years later. 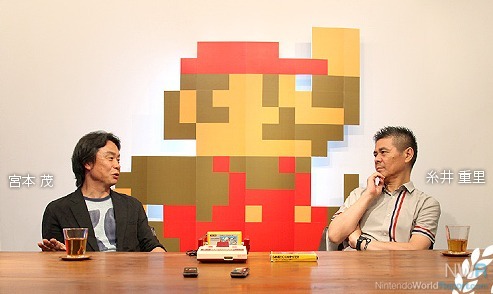 In the UK, Nintendo sponsors an extra edition of the weekly MCV UK trade magazine devoted to Mario's anniversary. Articles include comments from developers, journalists, and the Nintendo UK team. 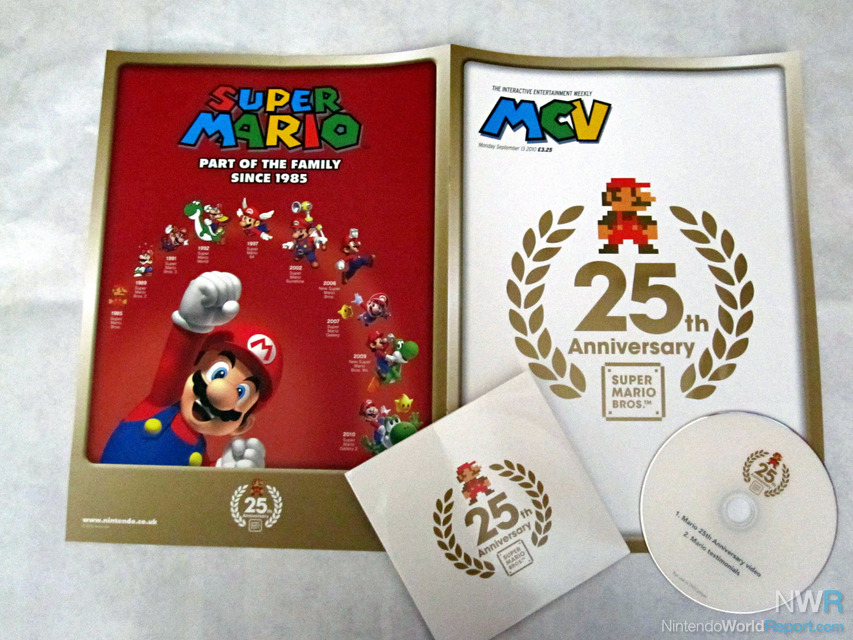 A DVD was enclosed containing the video campaign, of which shorter format versions have been running in television advertisements since September 9, and the debut of the 90-second version in a primetime slot tonight. The video includes testimonials from real people to UK celebrities including Jonathan Ross, Ant & Dec, Jamie Cullum and Diversity. Patrick Moore, renown astronomer and the original GamesMaster from the television show of the same name, is featured near the end of the video, describing how to reach the warp zone in Super Mario Bros.

Looks to be quite a nice package, but I presume the caveat is that it's literally just Super Mario All-Stars shoved onto a Wii disc?

That was pretty much known back when Nintendo announced it, they never claimed or hinted that it would be enhanced in any way.

Oh man the mario collection is ass. I really wish they would have taken my ideas:


When is the US 25th Anniversary ? Or are they going to just going to mark it as worldwide and not talk about specific areas ?
Is Nintendo of America not doing ANYTHING? Europe and Japan are doing something but not America, come on Reggie!!!

This thing looks so freaking cool. C'mon NOA do something for us i want it sooo bad!

When is the US 25th Anniversary ? Or are they going to just going to mark it as worldwide and not talk about specific areas ?
Is Nintendo of America not doing ANYTHING? Europe and Japan are doing something but not America, come on Reggie!!!

Well, this is a tough question. The game was not available for the systems launch (which was in the New York City area in October 1985), but it was available by the time they did the national launch in August 1986. Nintendo list the release date as "1985", the interview with Miyamoto on New Super Mario Bros. Wii on "Iwata Asks" states March 1986. A press release from Nintendo for NSMBW states the series made its debut in March 1986 (). So the actual 25th anniversary for the US is probably sometime early next year. When (or if) they actually celebrate it, who knows.

I can't believe they got the GamesMaster out of retirement to give one last tip! Where was Dominik Diamond?


Also, I don't believe for one moment that Wossy played though a Paper Mario game. Played 5 minutes of one, possibly.

This video contains content from Nintendo UK, who has blocked it in your country on copyright grounds.

Regional blocking of media really needs to stop. It's understandable in China (though still no less acceptable) but this is ridiculous.

Tell me about it, I can't watch episodes of Doctor Who on BBC's site because it's blocked to non-UK IP addresses. I know there are ways around that, but it's annoying. I can understand something like animes since the rights might vary from region to region, but not something like this when only Nintendo owns the rights.

Just look it up on YouTube, it's probably on there somewhere.

I am aware, I just prefer to watch videos legally if possible. I may have to do it to watch the current version of Doctor Who though since I don't get BBC America and PBS takes forever to air episodes (they only just aired the second half of the finale "The End of Time" last Saturday).

Not allowing access to the iPlayer outside of the UK is logical, you haven't paid the license fee all British residents have, the server costs for allowing global access would be astronomical.
Same reason I couldn't watch Lost on ABC's site from Japan.
The Daily Show is a rare (awesome) example of allowing everyone access no matter where you live!

However, I do wish the BBC would allow some kind of online license registration which would give legal access to all BBC iPlayer content for those willing to pay for it from overseas. (ex-pats and Doctor Who fans mainly methinks!)

Is Netflix blocked overseas, even if you have an American account?

Netflix is only available to US and Canada (and Canadian subscribers only get the Instant Streaming version), so I doubt they would pay to have it be accessible to other countries. If anyone living outside of the US or Canada has a account, I would love to know for sure though.