The recently announced Battle Road Victory title will come with a special controller.

Square Enix has announced that their Dragon Quest spin-off title Battle Road Victory (based on an arcade card battle game) will receive a special controller courtesy of Hori. 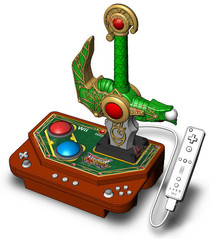 I like this DQ Spinoff Port controller better than any Classic Controller PS2 Clone Pro better than the real Talkback thread.

It has dual-anal controls.  Regular gamers love this sort of thing, right?

That looks pretty cool. Not $130 cool, but still nice.

Nicer than SMove at the same price.

I doubt this controller will be released here. Dragon Quest itself isn't very popular here, so no one would buy something like this.

the sword is the joystick? Move over RE4 chainsaw controller.

the sword is the joystick?

It's actually just a button.

But you're dying to use it for Monster Hunter, or even New Super Mario.

I believe there is an exploration section if I am not mistaken.

there's also a d-pad in the bottom left corner...

I didn't even notice those tiny things on the base. I thought the scale was off for the Wii remote, but that thing is HUGE.

lmao i thought the joysticks were those two big balls by the sword i just 'noted' the joysticks thought they were buttons before, and i also just noticed you can click the picture to make it bigger and better see the detail lol

Oh yeah, MJ is back! Welcome back, dude.

For a second I thought it was April 1st again. Wow.

Why does this thing remind me of a Famicom?