A new power up is revealed and more possibilities are promised in the cooperative mode.

An update on Nintendo's Japanese website for Super Mario Galaxy has revealed a host of screenshots and videos for new features. Exploring the microsite gives you a handful of screenshots of the new enemies, videos of the red, yellow and blue Yoshis and their various interations and some of the new gameplay.

As with the original Super Mario Galaxy, it will be possible for a second person to play cooperatively with an additional remote. The below image, taken from the microsite, seems to show the second player controlling a red Luma to help squash a Goomba. The text describes the two player cooperative mode as even more convenient, with more to do than before.

In addition, Official Nintendo Magazine has revealed artwork of a new power-up, Cloud Mario. This power seems to give him the ability to walk on steps formed from clouds. 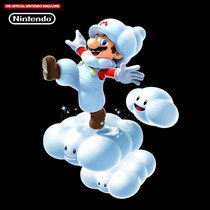 Interesting power up. How is this better than Yoshi?

Maybe there are areas that Cloud Mario can reach but Yoshi can't.;)

I like the design of this new power-up, but can't help but feel that it's a really redundant power-up.  I have a feeling it's going to be used just like the old P-block: you grab it, and suddenly whispy clouds turn solid to allow you to run to a secret or whatnot before the timer expires.  Ummm..yay?

I hate it when headlines contain spoilers...

I hate it when headlines contain spoilers...

seriously, is it necessary?

I guarantee you this is how Co-op Zelda is going to start. Controllable Navi on the way.

This co-op actually has me excited, to have an actual character represented by a well... character is great! Not some silly little cursor.

I don't really care, powerups in 3D Mario don't matter nearly as much as they do in 2D Mario, in 3D they're just a cheap way to change the gameplay style of one level, in 2D a powerup stays with you and can change the whole game.

I don't really care, powerups in 3D Mario don't matter nearly as much as they do in 2D Mario, in 3D they're just a cheap way to change the gameplay style of one level.....

And like Broodwars said it's a cool design and will look nice on a "Mario Power-up Compilation Poster" for 300 coins in Club Nintendo, but it will be like Boo Mario, cool for those two times you use it but easily forgettable..

This isn't confirmed but the way it might work is that you point at the screen and press a button and Mario jumps up.