Find out what inspired this excellent Switch game and also what Pokémon team its main character would have.

Sometimes it's the unassuming games that catch you off guard. That's definitely what happened for me with Dodgeball Academia, a release from earlier this year that features great dodgeball combat, enjoyable RPG mechanics, and an endearing world and story. Humble Games published it on Switch, continuing their track record of excellence on the platform (Carto still rules). The developer was Pocket Trap, a Brazilian studio that previously released Ninjin: Clash of Carrots on Switch in 2018 (we thought it was good). For as enjoyable as Ninjin was, Dodgeball Academia blew it out of the water, delivering one of my personal favorite games of 2021 so far.

Nintendo World Report (NWR): How did your experience with working on other games inform your thought process for Dodgeball Academia?

Henrique Alonso (HA): Dodgeball is our first experience with making a Sports game and an RPG game. Previously we launched Ninjin: Clash of Carrots, which was more like an arcade game that mixed shoot ‘em ups and beat ‘em ups. Dodgeball Academia is a completely different story. We have this background of working with action games, so I think it helped a lot with the dodgeball battles as well as the overall experience of knowing what to do and how the process works. It helped us know what we were doing and figuring out scheduling, for example. Our experience porting the game to other consoles like the Nintendo Switch was also very useful. We were much more prepared to port the game to the Nintendo Switch system then we were for our first game.

NWR: Dodgeball Academia definitely has a sports anime vibe. Were there any specific stories you aimed to capture?

HA: I think we were focusing on delivering a story that was kind of inspired by not only sports animes but also shonen animes overall - and also cartoons. We wanted it to feel cozy, like telling the local adventures of a school. Usually RPG’s tell these epic stories where the character starts small and by the end, he defeats the villain that is threatening the universe. For Dodgeball Academia, we wanted to focus the story on school situations like dealing with bullies and projects from the teachers, while also having the tournament arc. The tournament is a very important piece of the story to guide the character throughout the school year and for the player to feel the game’s progression.

We tried to bring many personal experiences to the game. For example, situations that we lived through when we were back in school. The whole project has a nostalgic vibe of being in school and practicing dodgeball with references to the sports anime that we grew up watching and loved.

NWR: I noticed while playing the game that the first few chapters gently ease in the player (going from 1 player to 2 players to 3 players to more chaos). How did you lend on that specific tutorial cadence for the game? Were there any other forms this opening took?

HA: We knew we wanted to have a sports RPG game where you play dodgeball battles, but dodgeball has some limitations and rules for what you can do inside dodgeball. We tried to bring in as much variety as we could, ranging from introducing new characters who feature different throws and abilities. I think it is important to not leave the player feeling too overwhelmed in the beginning. We wanted to build a journey where you start small and then begin gathering new students to join the team. Even though the core gameplay can get a little repetitive as you are always playing dodgeball, we wanted to make sure each episode brings something new to the table.

NWR: I'm a big fan of the Kunio Super Dodgeball games and this felt like one of the few games to nail the feel of those old games. What would you say is the key to how you were able to balance the throwing/catching/countering gameplay so that it stayed fun throughout the whole story?

HA: We also grew up playing those games - especially Super Dodgeball for the arcades, which was more of a fighting game. It was very challenging for us to adapt this game to a single player story focused RPG environment. We tried to bring as many different mechanics, throws and balls as we could into the game. We wanted to have even more actions, but some ended up being cut as we have a finite amount of resources and we have a schedule to follow. It was very important for us to allow the player to choose which character they like the most and build their specific team and have equipment bringing a decent variety in the game, where you can customize your party as you like. It was very important for us to bring the different ball ultimates and mechanics so you can customize your team and we could call the game an RPG. 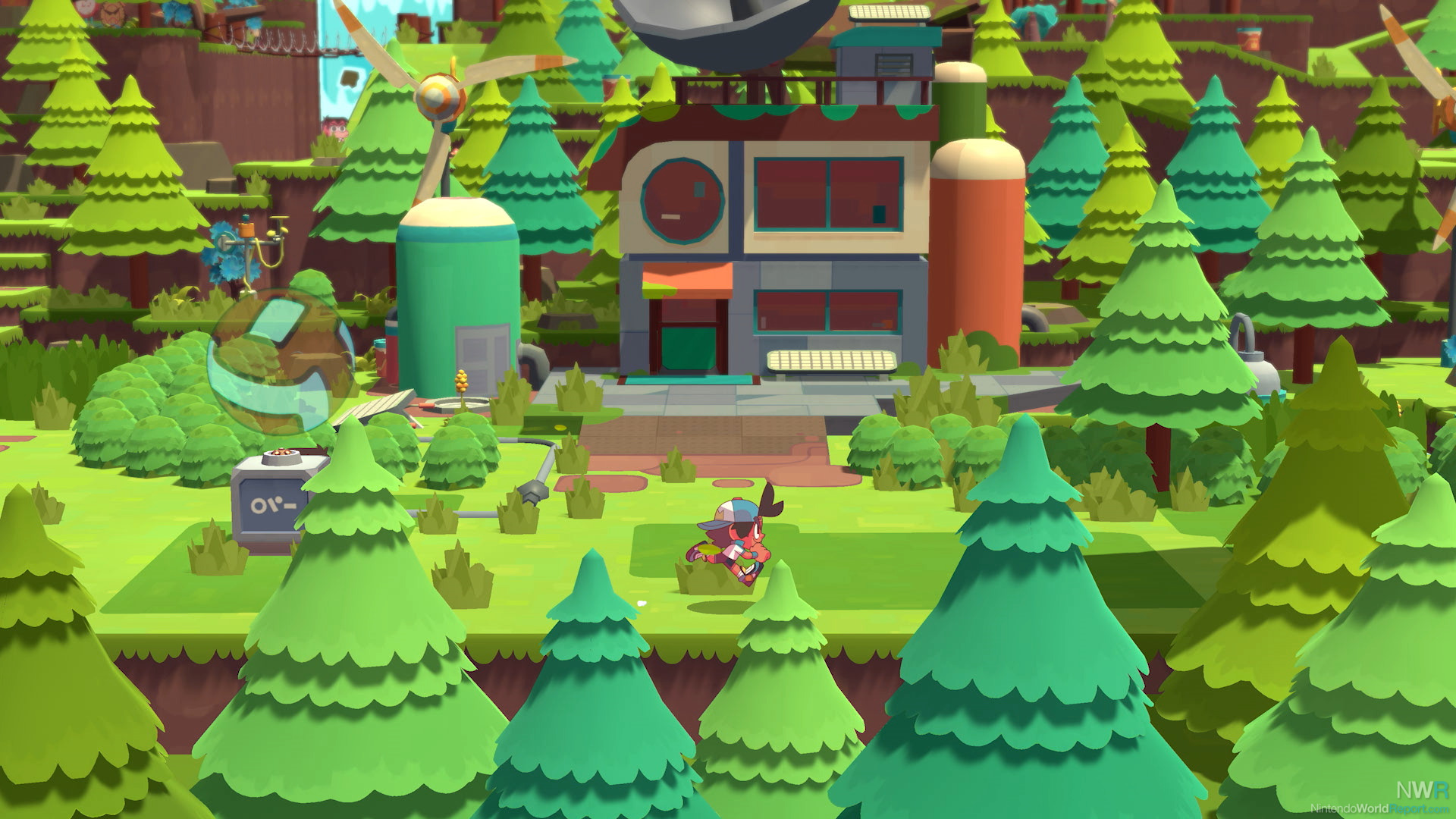 NWR: The single-player story seems like the focus, but there's still local multiplayer here. Was there ever any plans for online multiplayer or perhaps a more fleshed out multiplayer component? Any reasons why it didn't happen?

HA: We would have loved to. The game kind of started by borrowing lots of inspiration from the Super Dodgeball games, which were focused mostly on multiplayer and versus. When we started developing the game we started with a versus mode before developing the AI, as we wanted to see how the game was working and how it was feeling. We also knew the focus of the game was to be this single player story RPG. As much as we would have loved to give a multiplayer focus, we kind of had to choose and we chose the single player path. When we were reaching the end of production, we actually decided to include the versus local mode as it was a very fun extra, at least for us. We wanted people to experience and have the chance to play as Boris, for example - which is a character that does not join your party. It also kind of brings a nostalgic feel for unlocking characters as you play through the story. We used to play lots of games from the PlayStation and Nintendo 64 eras, which usually had this bonus local multiplayer and we wanted to bring this to the game.

Perhaps in the future we can bring an expansion where we have online multiplayer. I know lots of people would love to, but there is a lot of work involved as not all characters are balanced or work as intended when you bring them into a multiplayer involvement. Most were made for the AI to control them. It's a lot of work but you never know - maybe in the future.

NWR: Fighting random kids around the school grounds felt a lot like Pokemon trainer battles. Was that a deliberate decision? If so, are there any other specific Pokemon references (the infirmary feeling like a Pokecenter comes to mind!)?

HA: I love this question! Yes, I think it is evident that we love Pokemon and we love Nintendo as a whole. We grew up playing Paper Mario, and Pokemon is one of my favorite games of all time. I would not say it was really a deliberate decision. It was a more natural thing for us because at some point we needed to add more battles to the game and we did not want them to be random, so our solution was the students who are located around the school challenge you as they want to practice. 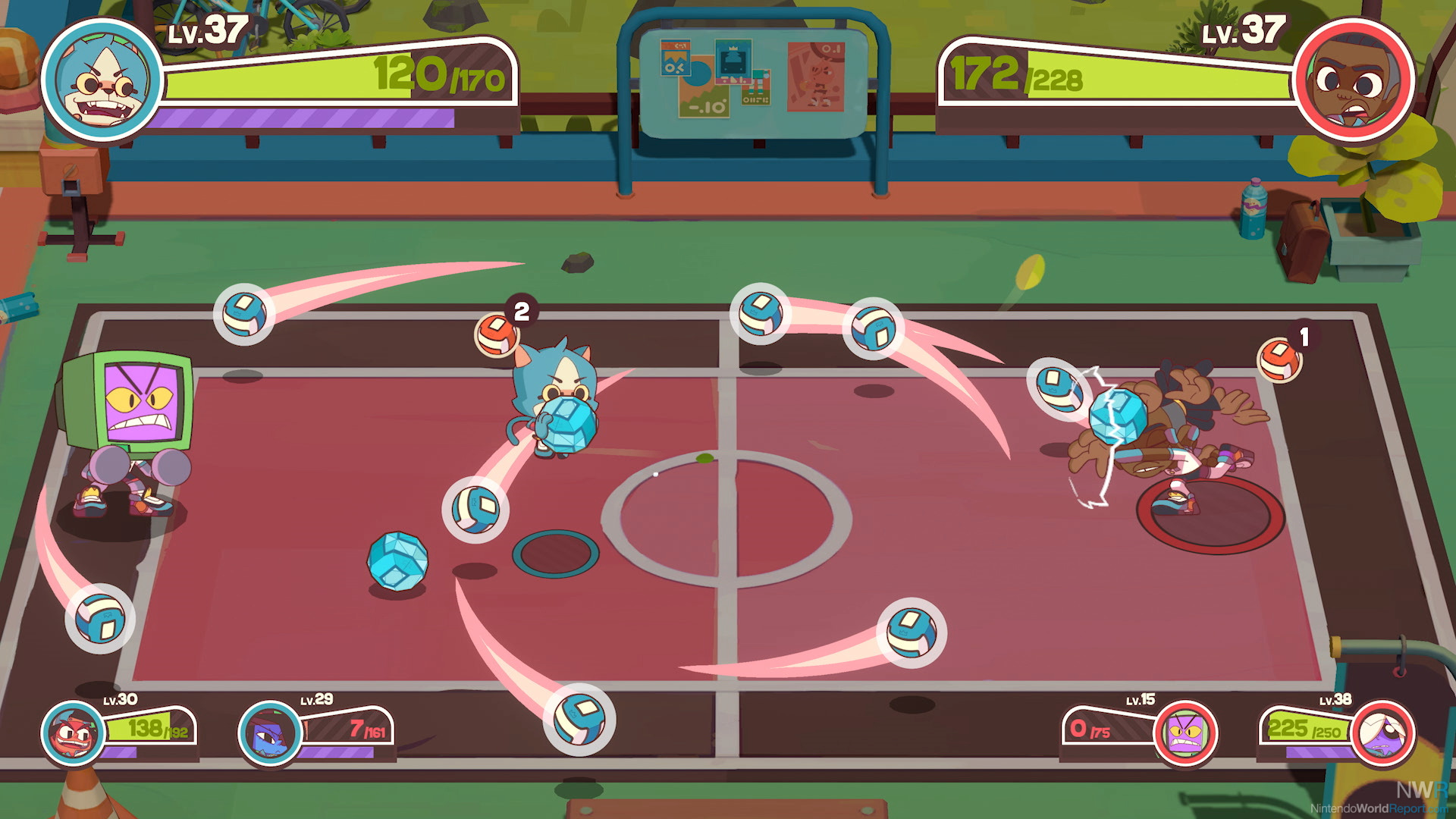 NWR: If Pokemon is indeed an influence/interest, what would Otto's ideal Pokemon roster be?

HA: Otto is inspired by the dog of the co-creator and art director of Dodgeball Academia, Ivan. So Otto definitely needs a fire type dog Pokemon. He would probably start with Growlithe or Arcanine as a starter Pokemon. I think he has an Ash Ketchum vibe, where he wants to adopt everyone and bring everyone to his team. I think he would have some Pokemon there that are not considered as useful or beloved like Luvdisc maybe. Luvdisc, Toxicroak who has that big chin… haha. In the game we have George who takes care of the school and has this huge chin and plenty of jokes are related to it, so Toxicroak would be in Otto’s team. Then another fire Pokemon like Victini...Voltorb as he is a ball Pokemon so Otto could practice some dangerous dodgeball with him. And maybe Ditto because Ditto has this possibility for jokes like making Ditto look like Balloony. That would probably be his party.

NWR: Were there any characters in the game that you wanted to make playable but weren't able to in the final game?

HA: Yes there were. I really wanted Squid to be one of the playable characters but we ended up having to make her an opponent. We had some characters who never made the cut and maybe in the future they can come in and join the team. At some point I really wanted Vampy to join the team as she is a personal favorite. Overall though, I am really happy with the roster and Otto’s team.

NWR: What Nintendo character would be the best at dodgeball and why?

HA: I would say probably Kirby, because he could absorb all the balls that are thrown at him and throw them back. Also maybe Yoshi because he could also eat the balls and throw them back (laughs). Donkey Kong would have the strongest throw ever. It could be a very fun game. If Nintendo wants to hire us to make a Super Mario Dodgeball game please feel free to invite us! We would love to work on it.

Thank you to Humble Games, Pocket Trap, and Fortyseven Communications for the interview opportunity!