Interview with Two Tribes about RIVE's Features and Future

Martijn Reuvers explains why the visceral shooter is worth your time!

In the third interview of the Gamescom 2015 series, Daan chats to Martijn from Two Tribes. The rebooted company is working very hard on RIVE, which was heavily featured in the Nindies@Home promotion. Learn more about the game and what is next for the company!

Nintendo World Report (NWR): I'm here with Martijn (Reuvers) from Two Tribes, we're here to talk about Rive. Can you give us a quick overview of RIVE and tell us about yourself?

Martijn Reuvers (M): I'm Martijn, I'm one of the founders of Two Tribes. We're actually a pretty old company, we were founded in 2000 so we've been around for 15 years now. We used to make a lot of puzzle games, perhaps you know us from Toki Tori, we released it for the Game Boy Color, several mobile platforms, Nintendo 3DS is upcoming, we did it for the Wii, the Wii U, basically any platform you can imagine. We did that, now we're working on something completely different, no more puzzle games. It's a shooter game we're making, RIVE, a classic hardcore shooter.

NWR: I've played Rive a few times, and I've enjoyed playing it. To someone who's never seen the game, how would you describe it?

M: It's an action packed visceral shooter. It looks very alive, very vivid, bright colors, a lot of particles and explosions, very action packed. If you had to describe how it looks, that would be it. It has a cartoonish kind of style, it's not very realistic, but it's not too cartoony either. It's somewhere in between.

NWR: So the game is a brisk 2D shooter, there's a lot of competition in this genre. How do you make it stand out? 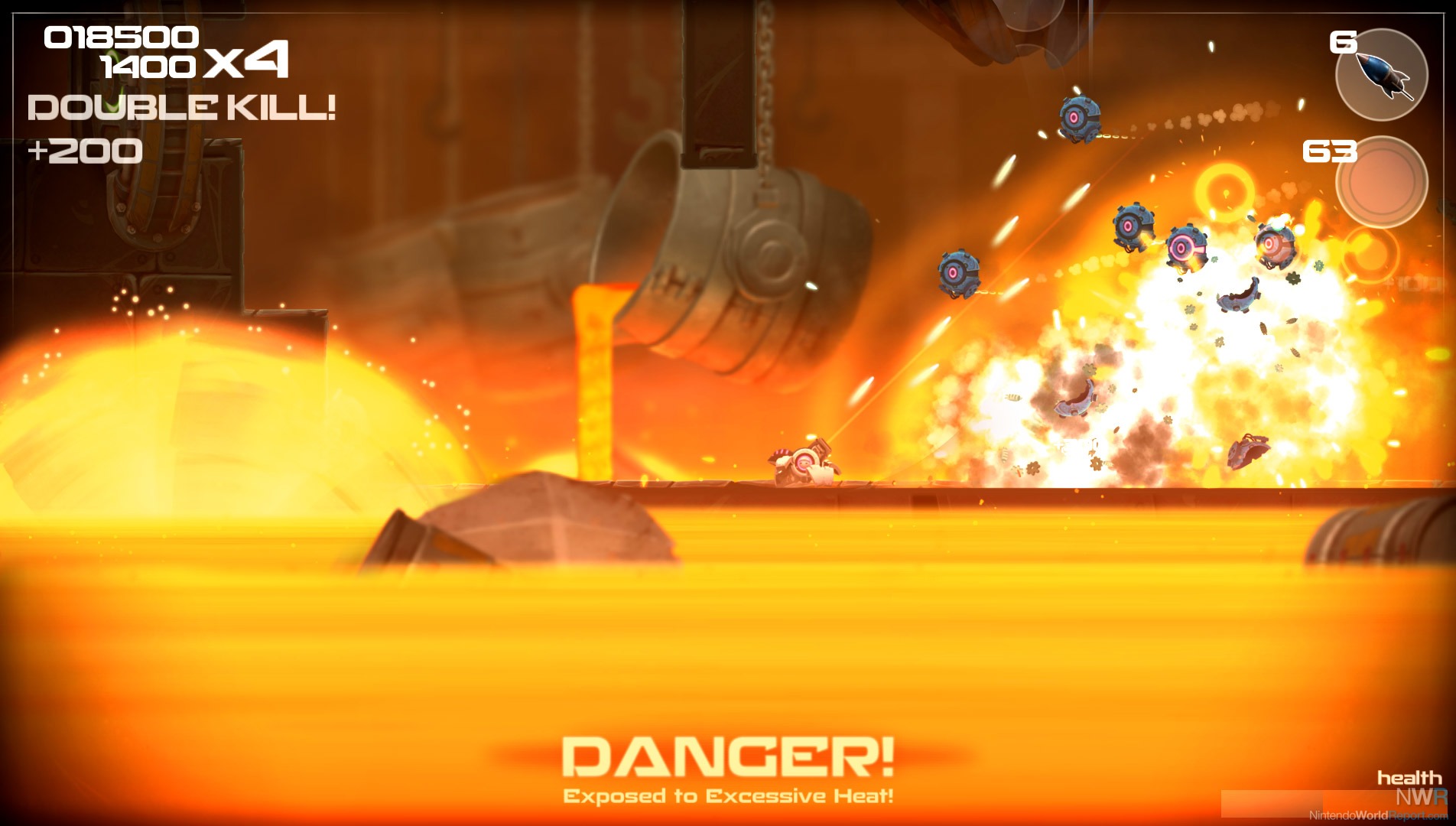 M: We're not very good at marketing research, we just do what we feel is right to do. When we make a game, we embrace it and tweak the hell out of it until it feels right. Hopefully that resonates with the people as well. That's our approach. It's probably a very stupid approach, but that's what we do. So we're not thinking about how can we make this better than the competition, we just know what we want to make and we want it to be good for ourselves when we play it. I don't know if that answers your question, but there we go.

NWR: Fair enough. What makes the game so intriguing, not just shooting enemies but also the hacking mechanics - you can also turn these kamikaze turrets onto your side?

M: We did come up with something that is different from other shooters, in that respect we have something that is unique. You can actually alter the environment by hacking them, there'll be special hacks that will be given to the players throughout the game. For instance, you can hack a healing bot, and instead of healing the enemy he'll heal you, follow you around, etc. Later in the game, you can hack the shooting turrets mounted on the walls and they'll detach and they'll follow you around becoming your secondary fire. That's a mechanic that I think opens up ideas for the designers to play with. For instance, the kamikaze you mentioned when you hack transforms in some kind of zero-gravity bubble, so suddenly you can float around in the area to find areas you couldn't reach before.

NWR: Travelling across the environment is a nice thing - what sort of obstacles does the player have to face along the journey?

M: I'd say a lot of dying. (laughs) I guess you already saw them - a crusher chamber, a lava chamber... 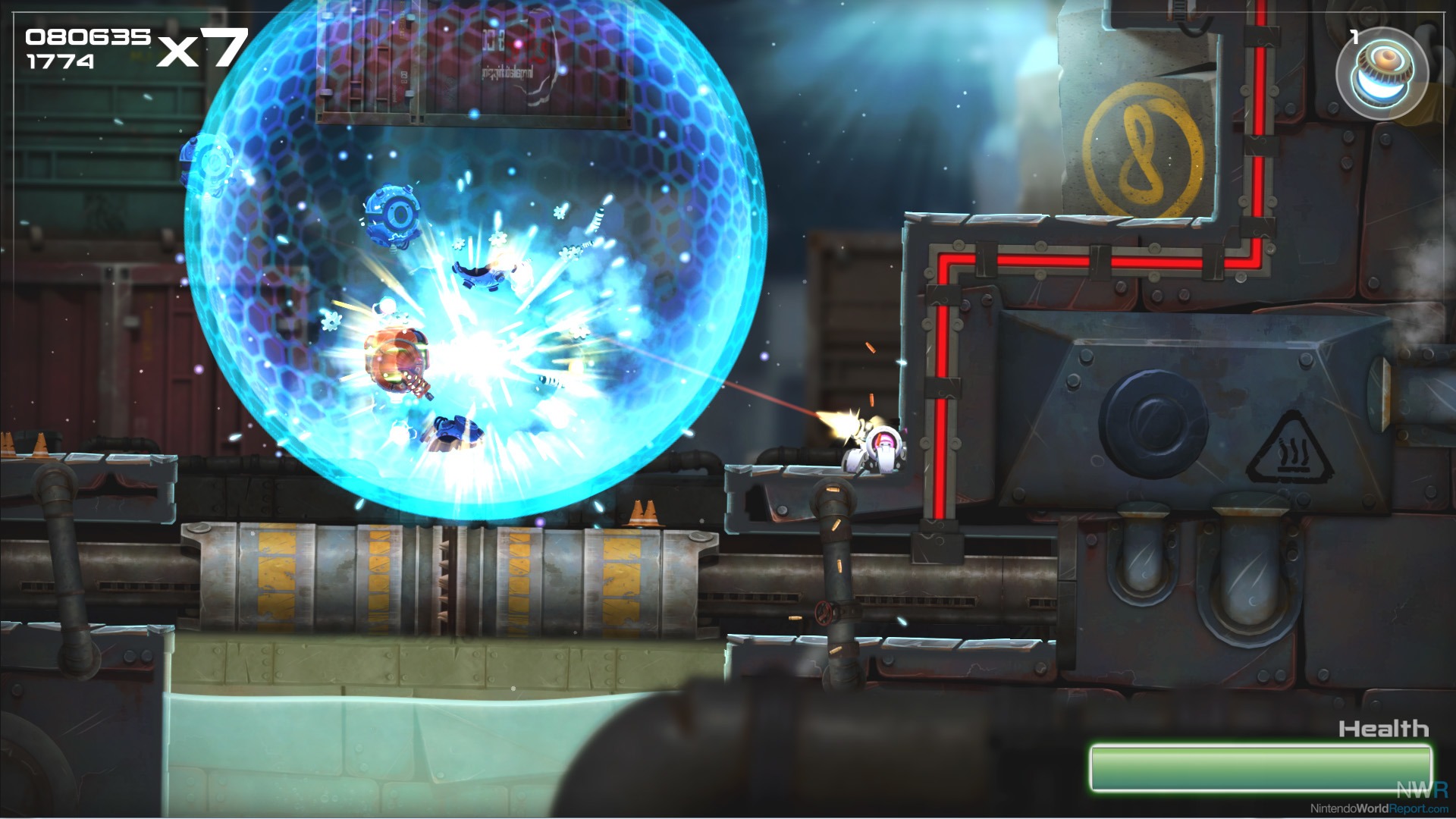 NWR: Are you sure?

M: It's no problem. There'll be all kinds of hazards that the player will face and he probably dies a lot of times. It's our job to make sure if you play it, it feels right and it actually makes you laugh, you actually want to try again instead of saying "Oh, this feels frustrating" and wanting to quit. It's a fine line, a fine balance, but that's what we want to aim for. It's a tough game to master, but it's fun and it's challenging.

NWR: Are there various weapons in the game, or are you mostly sticking to the one gun you have?

M: At this point we're sticking to the one, primary gun that you saw, but if you hack a turret, you suddenly have two guns so something like that we'll do. You'll have multiple secondary weapons, like the homing missiles and the electromagnetic pulse, actually yesterday I made a shotgun. It still has to be tweaked but it will be interesting to see a close combat weapon that can instantly kill a lot of enemies around you, which is very handy in a lot of situations. We're thinking about grenades, and a lot of secondaries that we're actually considering.

NWR: Is the game solely a single player experience?

M: Unfortunately, yes. For us, it makes it easier to focus on the solid single player experience rather than shift focus around. Ultimately, if this game sells well, I'd like to make a multiplayer version of it but it's very difficult, you can't just hit a button and suddenly there's a multiplayer version - it's too difficult. On the same console, on the Wii U, it's possible to have multiplayer on the same device, that's a lot easier, but we want to guarantee we have a steady framerate of 60 frames per second then it's very difficult to do. For now, it'll be only single player. Depending on how it sells we might do something else with it.

NWR: How large is the scale of the game? Is it going to be small but impactful? 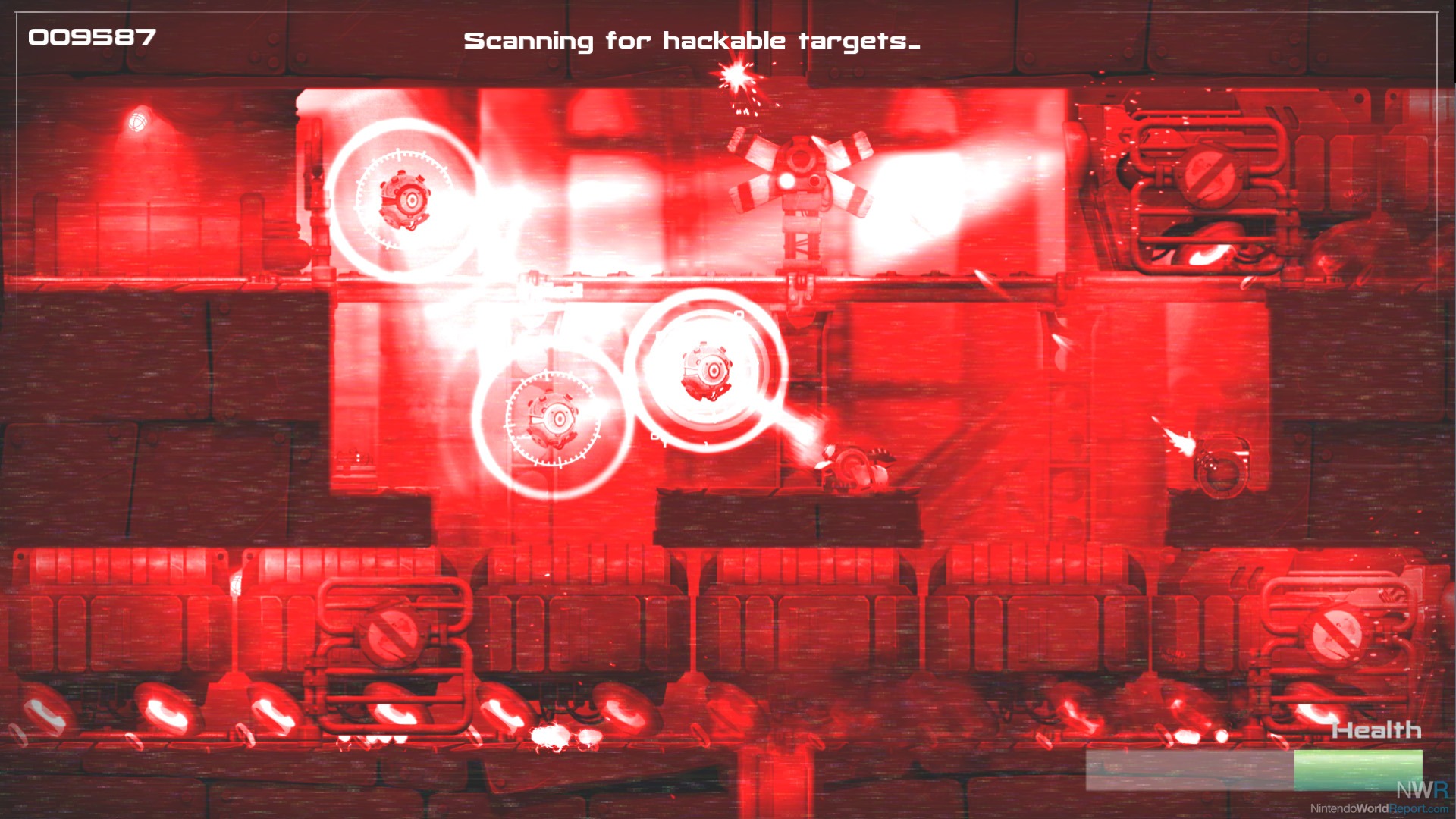 M: When we were making this game, when we set our goals almost two years ago now we wanted to make a small game partially because we didn't want to spend too long on the game. Originally we wanted to spend 6-9 months, now we're pushing the two year limit. In that respect it's a long game, but you're aiming for the content - what we're aiming for is 4-5 hours, people should be able to do it in 4-5 hours. The game will be priced about $10, for that amount of gameplay for that price it should be reasonable. That's always what we're trying to think of.

NWR: Will the Wii U version use any unique capabilities? Or is there basically not much going on the Wii U GamePad screen?

M: I'm the only programmer and I'm not a very good programmer unfortunately, it's tough for me to get it on a steady 60FPS if I use a clone mode, which is what we have now. The TV and the GamePad screen is exactly the same. If we have separate renderings on the screens it'll be even tougher for me. For now, we'll stick to clone mode but who knows what comes up. Perhaps we'll have some unique features for it, but to get this experience on the Wii U where you shoot, kill and do the things that you like - perhaps we'll come up with some bright ideas. I don't know.

NWR: The game was a part of the Nindies@Home program - did you get any good feedback from it?

M: Definitely. People sending us emails, there were some forums we read feedback from, people really liked the game and I was very happy that Nintendo offered something like that. It would be nice, if Nintendo's listening, that next time it'd be nice if there was a Miiverse channel also open for us so we could talk to people on the platform itself. That was the only thing I was missing, it was a very good experience.

NWR: I just found the window of opportunity was really short - a week.

M: Yeah, it was just focused around E3, it would've been nice if it was extended for a couple of weeks. It's better than nothing, so I was happy they did it and hope they'll do it again at another event closer to the release date. 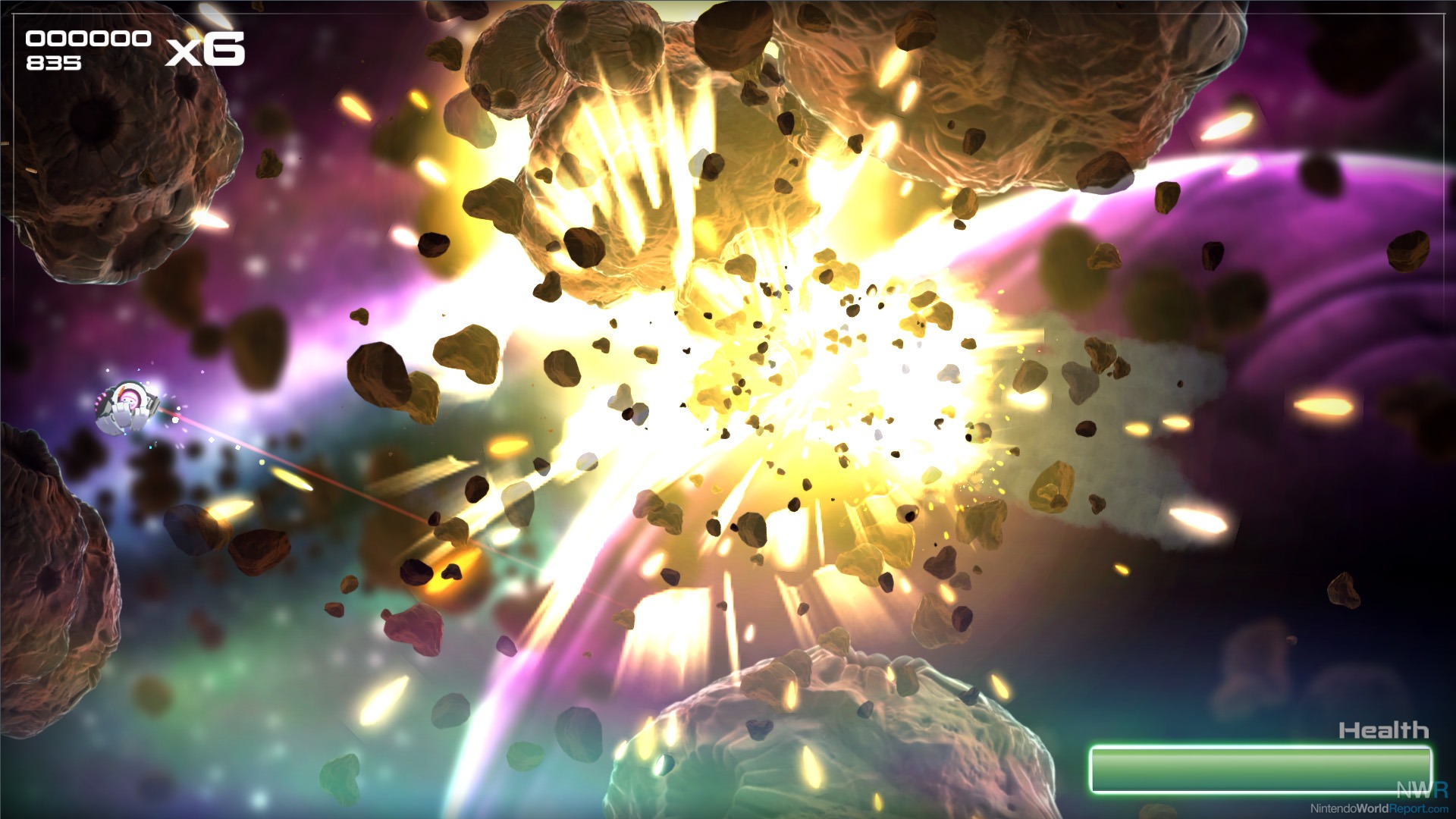 NWR: You've been always supporting Nintendo systems - how will that be in say, a couple of years?

M: If they still make consoles then, and I hope they will especially after the NX, I'll always support them. I'm not just saying that because I want to please them, we've been working with them for 15 years and it just feels right. If they're still making consoles, we'll be there.

M: Thank you very much, Daan.

Good interview, I enjoyed reading it.


One thing was said that struck home for me:
"We're not very good at marketing research, we just do what we feel is right to do. When we make a game, we embrace it and tweak the hell out of it until it feels right. Hopefully that resonates with the people as well."

Not sure that approach resonates with everyone, but it does for me.  I think that Toki Tori 2 is one of the most brilliant games I've played in years, in large part because it feels like they approached it the same way (designing and tweaking until if just feels right).


Very excited to see more about RIVE, and try playing the full game eventually. Best of luck to Two Tribes with the game!

I don't know what's wrong with the NWR forum editor, but anytime you copy and paste content into it the results are terrible (as seen above).  No edit button makes things nearly unreadable.
:(

My apologies to anyone having a hard time seeing what was written.