Neal digs deep with one of the developers of the upcoming 3DS eShop title "SteamWorld Dig"!

Our very own Neal Ronaghan got a chance to chat with the co-founder of Image & Form, Brjann Sigurgeirsson, and talk about their upcoming 3DS eShop game SteamWorld Dig. What does the developer say about why they chose the eShop over the mobile and tablet market, where they got inspiration for the game, and taking advantage of the 3DS' unique capabilities? Well you'll just have to read on to find out, cowbot! 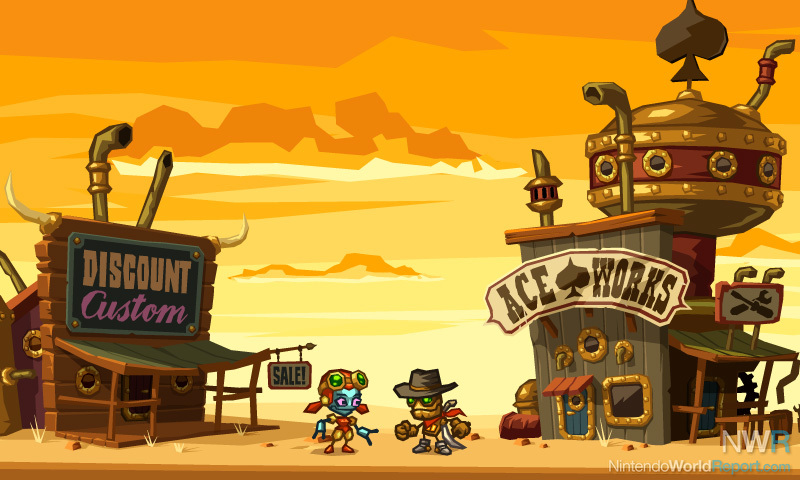 Brjann Sigurgeirsson: Going straight for our secret weakness. I see. This'll be THAT kind of interview. Well, the name Image & Form is very profound, and we spent around 300,000 dollars on an agency to come up with that name.

No, actually we didn't. The name was a compromise between me and my co-founder back in 1997, when we started I&F. I wanted to call the company Imagenation (with that clever spelling), and she wanted to name it Monkey Business. Since we couldn't agree, we put it to a vote among friends. One of them came up with a third alternative, and strangely most of our useless friends thought Image & Form was better than our initial suggestions. So today I can't really tell you what it means, but if there's anything about Image & Form I'd like to change, it's the name. All the people are excellent, and it's a very creative environment. It's therefore simply unthinkable that we can't come up with a much better name in an instant, but we've got other - hopefully better - things to do. In any case, it's becoming a painful in-joke at the office.

What exactly is SteamWorld Dig?

We call it a "hardcore platform mining adventure", so I'll explain what we mean by that. A platformer usually contains a predefined world of hurdles to overcome - be it by running, jumping, swinging, swimming or crashing. SteamWorld Dig has platform elements in that you run,jump and encounter foes, but the main objective is mining. That means that you build - or actually deconstruct - the world, and create your "platforms" that way. This, and the fact that the locations of items, treasure and tunnels are randomized, makes for a unique experience every time you play.

The controls are like a platform game, the objective is mining, and the emergent gameplay makes it an adventure. We believe that mixing game genres makes for a deeper game experience - a lesson learned from the success of our iOS strategy game Anthill, which was a mix of castle defense, real-time strategy, resource management and line drawing. In SteamWorld Dig, we aim to mix platform play with puzzles and emergent elements. We've tossed in "hardcore" in the description, because we're certain that the game will appeal more to experienced gamers than casual players like, say, my mother. (She'll be coerced into buying a copy anyway.)

Our protagonist Rusty, a lone robot (or "cowbot", as we call him) comes to a small Western mining town called Tumbleton, after having received a deed for a mine from his long-forgotten uncle. Although the inhabitants are friendly and helpful, there's something very wrong with the town. And Rusty will find out what it is - towards the end of the game.

Rusty is your token lone Western cowbot hero, who doesn't really like to talk too much, and definitely doesn't complain about the workload. He's fearless, handsome in a robot-ish way, and has an adequately-sized coal furnace for a belly. He's definitely one of the good guys, and perhaps the robotic equivalent of Clint Eastwood's character in Unforgiven. His objective is to get the town back on its feet, and helping the townfolk in the process. Rusty isn't prone to violence unless it seeks him out. He really has nothing against humans, but the despicable remnants of humanity hold a grudge against robots. Bad mistake and their loss (we hope). He's not that curious,but here is a real mystery. And someone's got to solve it.

The objective of the game is to mine, sell, upgrade equipment, watch the town recover - and dig ever deeper to find what evil lurks below. There are a lot of quirky mechanics that help you navigate the underground, things that may seem obvious to a robot but which require some mastery for humans. All treasure hidden underground needs to be converted into cold, hard cash before you can buy things with them. As team-driven robot has use for other things than humans - coal for light and energy, and water to produce steam. Luckily, this can be had- as long as one has something to trade for it. 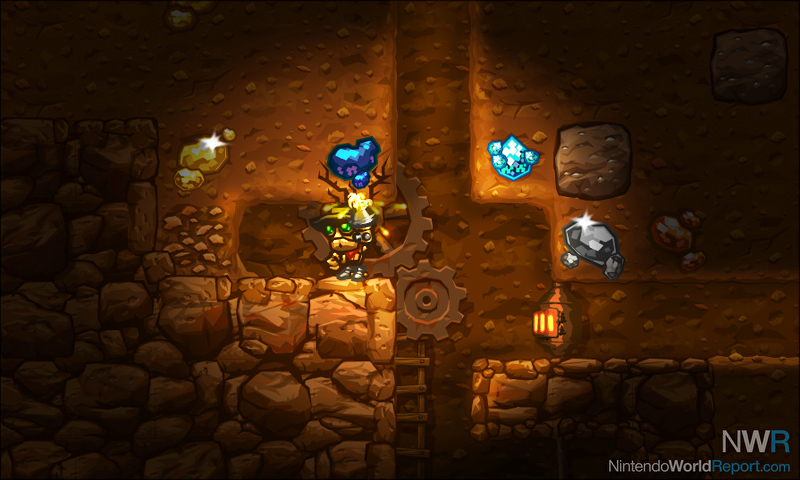 You've previously developed titles for the PC and iOS, why the move to the 3DS eShop? What makes SteamWorld Dig a fit for the handheld?

For a number of reasons. In 2010 we developed SteamWorld Tower Defense for Nintendo DSiWare. In comparison to the congestion and thunderous white noise of the App Store, the third-party DS-title ocean seemed very blue - and so we believed it possible to make money off a game on the DSiWare store. The DSiWare storefront itself was awkward at best,but we good a couple of good reviews, most notably from IGN who decided that the game was "Great", and the game paid for itself pretty soon after launch. It was a good experience, and we "knew" that we later could try developing for the 3DS and the eShop when it came along.

Today, we have a pipeline of around 15 great game ideas that wewant to realize at some point. SteamWorld Dig, which we call a "platform mining adventure", is one of them, and we really want to make a game for the 3DS while it's Nintendo's state-of-the-art handheld platform. The ocean is still blue, and the communities are active. 3DS gamers are dedicated to the platform, easier to reach and- at least we think so - less finicky than mobile gamers. They'll pickup a good game if they see one.

We think that SteamWorld Dig suits the 3DS very well. For one, it has the controls of a platform game. As such it's definitely a D-pad game, which more or less rules out touch devices, such as mobiles and tablets - I have yet to see a really good implementation of a virtual joystick. Also, the no-clutter split screen is perfect for the game: the game action shows on the upper screen, and the stats/map/buttons are displayed on the lower. And finally, it's a gamer's game: the player decides how long the game sessions will be, since the gameplay is continuous from beginning to end, not divided up in mobile-like,"coin-op" levels.

So the 3DS was the obvious choice. If you're a mobile-only developer, switching to the 3DS may seem daunting and you decide not to investigate the opportunities. But we've done it before, so it'snot a hurdle. 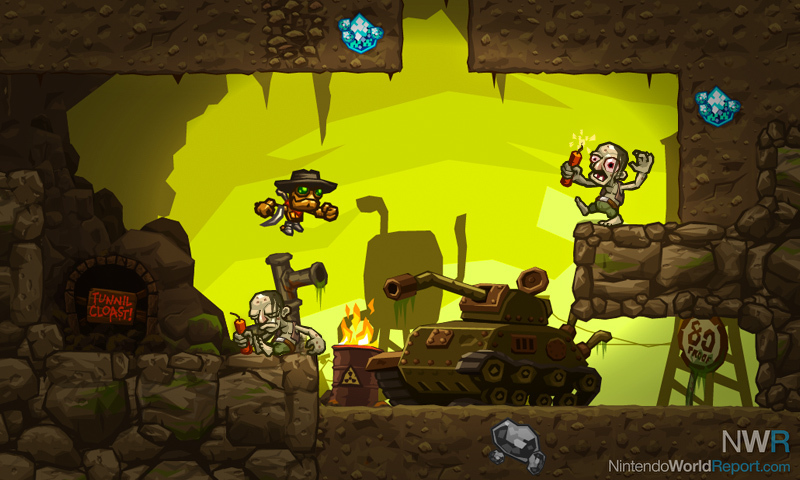 You've decided on a 2D, sprite-based aesthetic. That form of visuals is rare, and has its own unique set of difficulties. Why did you gothis route?

For one, it's a continuation of what we've done in the past - and what we do best. Although we've done a few 3D games, we're very 2D and a tour most comfortable when it's quite cartoonish. Working with 2D sprites is pretty work-intensive, but our production machine is both tested and flexible. We can also make the characters exactly as we want, when their looks and movements aren't generated procedurally.

What games serve as inspiration for SteamWorld Dig and its mechanics?

To answer in a roundabout way, I think it's safe to say that we develop games because we love to play games. So it may be interesting to realize that SteamWorld Dig wasn't inspired by any particular games developed by others. Rather, we had the SteamWorld universe from SteamWorld Tower Defense to build on, and wanted to tell a bit more of the story. In SWTD, humans were trying to raid mines run by honest,hard-working robots, but very little else is told. Why are robots running the mines? Why are the humans a mad bunch of lowlives? What has happened?

Are you on track with development? You've mentioned wanting to shipthe game to Nintendo in mid-May.

Yes, we're on track - almost, at least. We will submit to Nintendo in early June, and then they have a quite long approval process. The good news is that we can finally reveal a release date. It makes little sense for us to release the game in July since we're almost all on vacation, so SteamWorld Dig will be available on the eShop on AUGUST 8. That's it, and remember where you read it first.

Will the disposal of enemies cone from just causing cave ins, or canplayers attack them directly?

Rusty is a friendly, peaceful and hard-working cowbot, but if an enemy crosses his path, he also crosses Rusty. His arsenal of work tools can also be used for fighting. So it's either pickaxe, drill or The Steampunch - a very robotic tool.

Just where does this adventure take us? I've seen areas that appear tobe more mechanical than the dirt based stages.

There will be a number of worlds. They are different from each other and therefore require different strategies, but the same game mechanics will apply. Both enemies and ground texture change as Rusty digs deeper and deeper. Although we've never worked in mines, we imagine that mining is tougher at great depths. Not so much soft soil;more rock and less roll, so to speak. And there will be different evils in the different worlds. 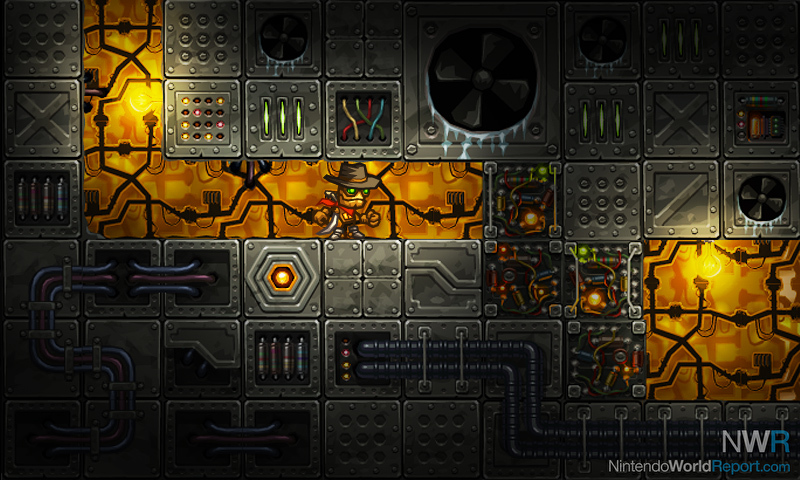 Will the game have any StreetPass functionality?

No, it won't. It's very much of a lonely cowbot's game, and we haven'tthought up any great use for the StreetPass.

The game's areas are randomly generated. What are the pros and cons ofgoing this route instead of hand crafted layouts?

The maps are generated dynamically, which means that no two game sessions will be the same. Locations of objects, exits, shortcuts,exceptional treasure etc are randomized within parameters, so the game can be replayed - should be replayed - in order to be fully explored.It will also be fun to replay SteamWorld Dig to simply try different upgrade tactics and digging strategies. However, the layout of certain areas - such as caves etc, is hand crafted, because they have to be.It takes an awful lot of time, but it's worth it.

When players are in the digging stages, what are their goals? Are weretrieving items, or NPCs? What kind of mission variety is there?

There are items to be sold and upgrades to be found, but also missions where you find items that radically extend the functionality of our protagonist.

If you could make a sequel to one Nintendo game, what would it be and why?

What a simple question! Obviously we will make sequels to SteamWorld Dig and SteamWorld Tower Defense, provided that SteamWorld Dig performs as well as we believe it will. We think there will be a lot of the robot-human relation aspects left unexplored also after SteamWorld Dig. However, these sequels will contain radically different gameplay. But we'd also gladly make a SteamWorld Dig 2, if all goes well.