We talk with QubicGames about their upcoming WiiWare titles and learn whether Vin Diesel will be appearing in one of them. Exclusive gameplay video in the article. 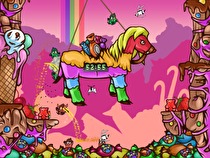 WiiWare will be receiving not one, but two games starring gnomes. We spoke with Michael Dys of QubicGames about both Gnomez and 2 Fast 2 Gnomez and also inquired if we might see a 3DS or Wii U game in the developer's future.

Nintendo World Report (NWR): To start, can you please introduce yourself?

Michael Dys (MD): Hi, my name is Michal Dys and I work for QubicGames, an indie WiiWare, DSiWare, 3DSWare developer and publisher from Warsaw, Poland. We tend to focus on Very Important Projects, but also work on Small Funny Things and sometimes we try to do Anything But Work.

NWR: Please give our readers a brief description of your upcoming game, Gnomz?

MD: Gnomz is an arcade multiplayer battle platformer for Nintendo WiiWare Service. Up to 4 player can play against each other and/or additional AI opponents. There are 25 levels in 5 magical worlds, 6 power-ups and three different game modes. At first the game looks like a crazy, fast, hectic skirmish and… it stays that way. When you play 2 people and 4 AI (6 total) the game’s a bloodbath (figuratively speaking, the game is for kids and there’s no blood and guts), but on the other hand when you have 4 people in SmashMatch or Socker you have to think more and plan, and when you just sit with a friend for a 1v1 battle, it’s very tactical.

NWR: What are the different control options? Do you support the Classic Controller and GameCube controller?

MD: You know, the game is so simple in its concept, just try to smash other players by jumping on their heads and try not to get smashed. We had tried adding triggered power-ups and weapons or special moves, but it made the game too chaotic and in the end it’s simply move and jump. With so simple controls: left, right and jump, there’s no need for other controllers.

NWR: Why did you choose to make your power-up socks?  People seem to always lose socks in everyday life. Do the socks that go missing become the power-ups for Gnomz?

MD: Just yesterday I had to throw away 5 unpaired socks. I live in the city center, no gardens or woods nearby and those little rascals still managed to steal them. But, given the magical nature of our socks,White Socks summon a Ninja Rabbit, who will help you with opponent elimination. Red Socks release the inner ancient Berserk nature of Gnomz. Transparent (washed-out) Socks makes the gnome invisible. Rainbow Socks summons a magical killer rainbow. Blue-striped Socks double your speed and jumps. Finally, Black Socks slow all opponents down. This one is my favorite cause it’s so much fun watching them try to run away.

NWR: The game has a strong multiplayer focus. What have you included to engage people who must play alone when all their friends are unavailable? Are there any achievements or boss battles?

MD: Well, it is a multiplayer game after all, so we’ve prepared three different game modes.Smash Match is just a typical deathmatch. In Capture the Sock, you just grab the Golden Sock and run. All other players need to kill you to reclaim the sock. The one who holds The Golden Sock for the longest time wins. You can only eliminate the gnome that holds the sock. In Socker, socks of various sizes and colors are falling from the sky and the person who collects the most socks within the time or frag limit wins. You concentrate on sock-catching and don’t get any points for frags, but can smash and freeze the opponents for a few seconds. These additional modes change the game tactics and focus so much that you will certainly not feel bored even when you can only ‘practice’ alone. CPU intelligence is something we really put a lot effort into. We’ve decided to limit the game to one screen and one ‘weapon’ – feet. Bosses or siege mode would just not work without shooting or game progress.

NWR: Your next WiiWare title is a arcade-style platformer called 2 Fast 4 Gnomz. Could you describe the basic premise for it and does it bear any similarity to Bit.Trip.Runner?

MD: In 2 Fast 4 Gnomz, players takes control of a young gnome who runs (2 Fast) through magical kingdoms with help from friends (4 Gnomz) to find a princess bride and tons of precious socks.It is similar to Bit.Trip.Runner because:

A. You run from left to right

B. You avoid traps on your way to the finish line

C. We want to make it REALLY difficult.

What’s different is that you need to morph into another gnome to perform various actions i.e. you need to change into Berserk to smash through the wall or change into Speedster to jump over larger gaps. Game also features moving back in time and underpants gliding.

NWR: Do you have a rough idea of when 2 Fast 4 Gnomz will release? Have you spoken with Vin Diesel yet to see if he will allow a Gnome based on his likeness to appear in the game?

MD: Unfortunately Vin will not appear in the game. He wanted to and we wanted to, but our busy schedules interfered.We’re planning to finish this project within a month or two, so early 2012 release is most probable.

NWR: Any interest in developing for Wii U or 3DS in the future?

Definitely. We’ve just begin working on a 3DS sequel of our most successful DSiWare game AiRace (AiRace: SPE3D) but it’s scheduled for late 2012.  And as much as we’d like to get our hands on Wii U Development Kit, I don’t believe we have the manpower to produce games for the new Nintendo console. Maybe the year after next.

MD: Invite your friends or even parents to play Gnomz with you. It’s the easiest thing to learn to play and this game needs people to interact with. Also remember not to blame yourself (or your loved ones) if you can’t find a sock. Just accept the fact that it is now used as a powerful weapon in an underground magical kingdom of Gnomz.