Producer Eshiro-san talks about the new features of Ace Attorney Investigations, the possibility of other spin-offs, and more.

Nintendo World Report recently got to talk to Motohide Eshiro, a producer on Capcom's Ace Attorney Investigations: Miles Edgeworth. Eshiro-san previously worked on the Onimusha series and the recent Bionic Commando game, and is also working on Okamiden for DS.

Ace Attorney Investigations: Miles Edgeworth came out on February 16, and you can read our review for more information. 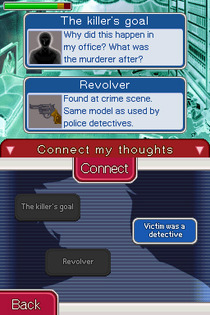 Motohide Eshiro (ME): Ace Attorney Investigations is set in the actual crime scene. The past series games took place at a courtroom so this is the most notable change. The players control the small avatar of Miles Edgeworth to find useful evidence to resolve the discrepancy and get to the bottom of the matter by investigating the locale. Also, this time the game features new "Logic Mode" utilizing the genius I.Q. of Miles Edgeworth in the game. This will make players feel as if they have become Miles Edgeworth and get emotionally involved in the game deeply.

NWR: What elements of the previous Ace Attorney games make an appearance in Investigations?

ME: The new Ace Attorney Investigations carries the element from the past game series of "presenting the evidence" to discrepancies. This time, players would "present evidence" at the crime scene to discover the hidden truth. Players can verify the evidence shown in 3D with smooth control surface using the Nintendo DS touch screen, as well as the heated showdown scene familiar to the fans. I am sure the series fans are going to love the game with the good mixture of traditional elements and newly added features.

NWR: If proven successful, will there be other Ace Attorney spin-off titles featuring other characters?

ME: As of now, we aren’t planning to make any spin-off titles. I actually want everyone to first enjoy this new Ace Attorney Investigations and then see where things go from there. However, if we receive many fan requests in the future, I will get together with the team to discuss the possibility, so all your opinions and support really matters for this. 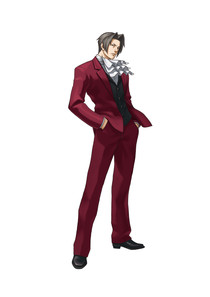 NWR: What was the inspiration to create a title starring prosecutor Miles Edgeworth, a character many see as a sort of antagonist to Phoenix Wright in the previous titles?

ME: Initially, director [Takeshi] Yamazaki and I wanted to create a new adventure game within the appealing world of Ace Attorney games. We came up with an idea of having a crime scene as a main setting and having Miles Edgeworth investigate the incident with Dick Gumshoe. Of course Miles Edgeworth was loved by all the fans and that was the big reason that he was selected.

NWR: With the previous Ace Attorney games set to be re-released as WiiWare titles, is a full-fledged Wii title in the cards for you and your team? 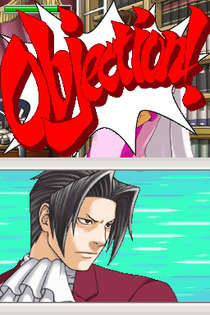 ME: Miles Edgeworth is a genius prosecutor contrast to Phoenix Wright being a rookie attorney. So we needed to come up with incidents larger in scale that suit the skill level of Miles Edgeworth. Naturally, the opponents are more formidable compared to what you’ve witnessed in the past series. As you will see in the second episode of the game, Miles Edgeworth will face a crime scene occurred inside the flying aircraft and there he gets involved in an international incident.

NWR: Was there any thought given to including Phoenix Wright in Tatsunoko Vs. Capcom?

ME: Director [Takeshi] Yamazaki and I were talking that having him in Tatsunoko Vs. Capcom could be a real fun but in reality, it would be pretty difficult to make it happen I think. 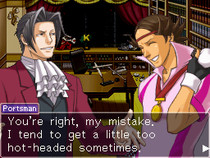 NWR: Were there any specific technical or design challenges the team encountered this time around?

ME: In original Ace Attorney games, you could only see a single character's waist up image per screen. In the new Ace Attorney Investigations, two animated characters appear on the screen simultaneously with a bigger image than the past game series. For implementing two animated characters at the same time on top of the newly featured mini-avatar action, we needed to make significant modifications. It was truly challenging for the programmers and they all worked very hard to make it happen. I think that they've pushed Nintendo DS's graphic processing ability to its limit for this change.

NWR: The Phoenix Wright series is a very unique type of storytelling. Is there anything that your localization people need to be mindful of when writing for a Western audience?

ME: There are always a lot of things to keep in mind, but the main thing was how to keep the dialogue natural-sounding and accessible to a Western audience while maintaining the spirit of the original Japanese. There were a lot of instances where the Japanese text had a pun or a cultural joke that, had I translated it literally, would've come across as a bit odd-sounding or completely incomprehensible. Then, there are times when I would love to add a joke in, but it was not in the original Japanese and might not be appropriate in that situation. It's a tough balancing act. On the one hand, if I stray too far away from the original text, I might also create an inconsistency in the tone of the game that the original development team had envisioned and created. On the other hand, I have to make the text interesting for a Western audience, so it's a constant struggle to get the tone of the localization just right. 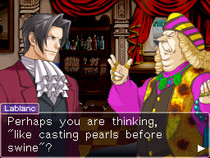 NWR: Did you feel it was risky replacing the courtroom drama with the "Rebuttal" phase, or do you feel Rebuttals serve the same purpose?

ME: I wanted to try out new expressions that could not be done in courtroom battle through rebuttal phase. To be specific, in Ace Attorney Investigations, many different characters come in and out during every scene in relatively rapid pacing, providing evidence to create drama with tension and excitement. Overall, I would say it is either equaling or surpassing the courtroom drama excitement in that sense.

NWR: Even though it is a story-based game (almost like a novel), has there ever been any thought to having an online component in the Ace Attorney games?

ME: As of now we are not planning to implement network play for the series.

NWR: What ultimately made you choose Miles Edgeworth over the other rumored choice as main character, Emma Skye?

ME: In the beginning, there were suggestions to have Emma Skye as a main character for investigations. She is, in fact, a very popular character from the series, but not as popular as Miles Edgeworth. As a producer, I considered the request from fans and made a decision to have Miles Edgeworth as a protagonist.

Thanks to Eshiro-san, Capcom, and FortySeven Communications for the interview!