We talk with Dawn of the New World's Teruaki Konishi and learn a few things about the Tales of Symphonia Wii sequel.

Out this week in North America, Tales of Symphonia: Dawn of the New World for Wii brings players back to the world of the original Tales of Symphonia for GameCube. We chatted with game director Teruaki Konishi at Namco Bandai to find out the thinking behind the sequel, new gameplay ideas such as monster capturing, Wii motion controls, online functionality, and a hint or two about possible sequels. Nintendo World Report will have a full review of Dawn of the New World in the near future.

Nintendo World Report: Dawn of the New World is a direct sequel to Tales of Symphonia. Why decide to continue the story with the same world and characters of the original game?

Teruaki Konishi: Tales of Symphonia is one of the most popular RPGs worldwide, so there was a lot of demand from fans for us to produce a follow-up. We were fortunate to have a storyline and cast of characters that allowed us to easily transition to a sequel, because we always planned for the original Tales of Symphonia to be a standalone game.

NWR: How big of a role will characters from the original game play in the sequel? Will some of them possibly wind up as playable characters, alongside the new cast? 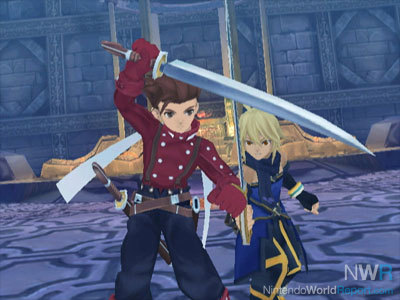 Yep, Lloyd is back in the Wii game.

NWR: Can Tales of Symphonia GameCube save data be transferred or otherwise accessed some way in the Wii game?

Konishi: Yes, we did include this feature as a nod to our longtime fans. You can load your save data from the GameCube Tales of Symphonia and receive a bonus when you start the game.

NWR: What new gameplay mechanics can fans of the original Tales of Symphonia look forward to in the sequel? Will the basic game system remain mostly the same, or has the entire game undergone a large-scale transformation for its Wii debut?

Konishi: Our biggest new addition is a monster capture system in which players can capture more than 200 enemies they encounter in battle. These monsters can then be used in battle, and evolved into more powerful forms. It’s something that is entirely new to the series, so we think fans will enjoy it.

We’ve also made a lot of tweaks to our battle system that I think fans of the Tales series will notice right away. For example, players can now free-run through the battle area, and we’ve also introduced an elemental alignment system. This is a fairly complex system, but it essentially allows players to receive bonuses for basing their moves based on the elemental alignment of the battlefield. Furthermore, each enemy will have an elemental alignment, so you can do extra damage if you attack with elements that they are weak against.

NWR: One of the major new features in Dawn of the New World involves capturing monsters and having them fight alongside you in battle. What inspired that idea? How can allied monsters fit into a party's overall battle plan?

Konishi: We’ve actually had this idea for a while now, but were just waiting for the perfect opportunity to implement it. The basic idea came about in one of our discussions about the use of resources in the Tales series. We thought, “the player eventually acquires so many resources along the way, from food to equipment and items – what if they could utilize the enemies as resources as well?” We have more than 200 monsters to acquire, and they all have different properties and effects in battle, so I think it’s something that players are going to be experimenting with for a long time. Monsters also give the battle party various enhancements in battle such as additional attack power or resistance to certain elements, so you’ll want to consider more than just raw power. 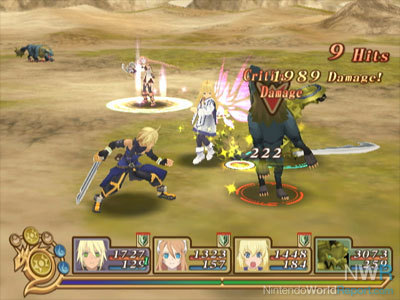 While the concept of the battle system remains largely the same,
the ability to freely roam the battlefield is sure to mix things up.

NWR: What was your team's approach to incorporating the Wii's unique controller functionality into the game? Do you believe that such features benefit the Tales series?

Konishi: Considering the range of Wii-specific control setups we’ve seen in games so far, it’s important not to go so far as to dilute the overall play experience. For this game, we added in some subtle controls that I think add to the game experience, but aren’t so over the top as to interfere with the play experience people expect from a Tales game. Compared to an action game that may only last 10 hours, our game is 3-4 times a long, so we needed to be especially careful that whatever motion controls we implement don’t become boring or tiresome the more the player executes them.

NWR: Was online functionality, such as downloadable content or online multiplayer(co-op/competitive) ever considered for Dawn of the New World? Has it ever been thought about for any future Tales game, on any system?

Konishi: This is a feature that we are interested in including in a Tales game in the future, but we were not able to fit into our schedule for this game. The leadership at Tales Studio is very bullish about implementing online play into an upcoming Tales game – it is something that the Tales of Vesperia team started to investigate as well, but we decided that we need more time to make it work correctly.

NWR: What was the basis for adding motion-capture to the game (a first for the Tales series), and will this be standard from now on? Could have this been done, in part, to more quickly complete the animation process for the hours of cut-scenes the game will likely have?

Konishi: For Dawn of the New World, we changed the proportions of our characters to something much more realistic than the original game, so we needed their movements to be more realistic as well. We also wanted our game to have a different type of animation than Tales of Vesperia to differentiate it visually. It was very helpful that we have an on-site motion capture studio in our office as well!

NWR: The first Tales of Symphonia featured 80 or so hours of gameplay. Can we expect Dawn of the New World to take just as long to complete? Or maybe even longer (or shorter)? Why do you feel the game needs to go on for so long?

Konishi: We’ve found that most Tales fans around the world are teenagers who have the time to invest into a very long game. This is one reason why we try to include a lengthy main quest as well as plenty of optional activities. Dawn of the New World should take about 30-40 hours to complete the main story, and closer to 100 if you really want to do everything possible with the monster collection system.

NWR: Do you already have an idea in mind for your next Tales game on the Wii (or DS or DSi)? Could we possibly see a third game set in the Tales of Symphonia world?

Konishi: We do have a few different Tales projects in development at the moment. As for another game set in the Tales of Symphonia world, it will be totally dependant on the users’ reaction to this game, so I hope everyone enjoys it!

Nintendo World Report would like to thank Mr. Konishi and Namco Bandai for the interview.