New Joy-Con games and a familiar feel fills up with hope for fun brain exercises.

I’ve always been a big fan of the Brain Training franchise. From the moment they arrived on the scene, I found myself going through every training exercise to help improve my short-term memory. Since then, I have played every single game in the series, including the DSiWare and 3DS outings. Now that the series is making its way to a system like the Nintendo Switch, I have reason to worry. The previous games were made for a two screen set-up, and it’s hard to deny that simple fact. Despite those reservations, I had the chance to give the Switch game a long try at Dutch Comic Con, where a three day old save file was prepared for us to hop into. The results are far more promising than I initially expected. 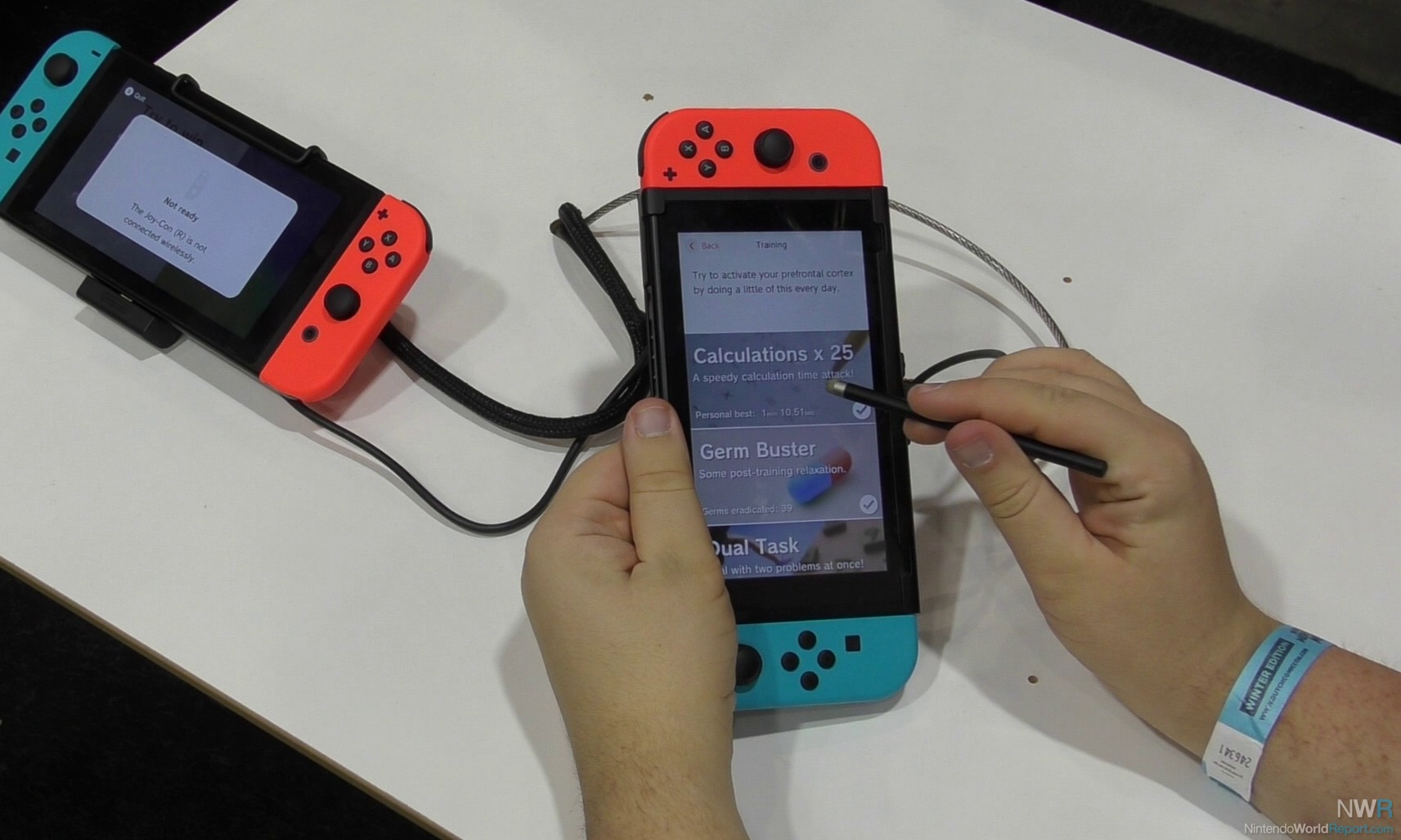 Two distinct parts separate Dr. Kawashima's Brain Training for Nintendo Switch: Quick Play and Daily Training. Quick Play consists of six exercises where you put the system in its regular landscape position. The first three games (Rock-Paper-Scissors Test, Finger Calculations and Finger Drills) all make usage of the right Joy-Con's IR motion camera. The Rock-Paper-Scissors Test is a quick brain age check, testing your reflexes and focus. At first glance, it seems like you're playing a simple roshambo type of game, but there is a twist in play. At random intervals, you are asked to win or lose, constantly playing with your expectations. Brain Training doesn't want the player to go automatic pilot and glide through this check, which I quite appreciate.

Secondly, we have Finger Calculations. This game sees flashing a number of fingers into the IR motion camera. This goes from zero to five, but that doesn't mean the game makes it easy. On screen, the numbers are showcased with hands too, forcing you to stay on your feet and think quickly. My favorite challenge in the IR games, however, is Finger Drills. With your hand, you’re asked to make various shapes in quick succession. From an open hand to a thumbs up, Finger Drills focuses on your hand eye coordination with pinpoint precision. At the same time, it doesn't try to lose you and keeps the instructions on screen at all times.

This is, by far, the most novel usage of the Joy-Con IR Motion Camera I've seen on Nintendo Switch. While games like Ring Fit Adventure and Nintendo Labo use it for functionality, Brain Training actually manages to implement into a video game. Initially, and I admit this, it felt weird doing these motions as I was unsure about the simplest things. How far does my hand need to be from the camera? Am I even doing this correctly? As I got the hang of the set-up, it quickly clicked in a way I really didn't expect. The moves really test you in surprising ways, and the IR stuff proved a fun new way to interact with training exercises. 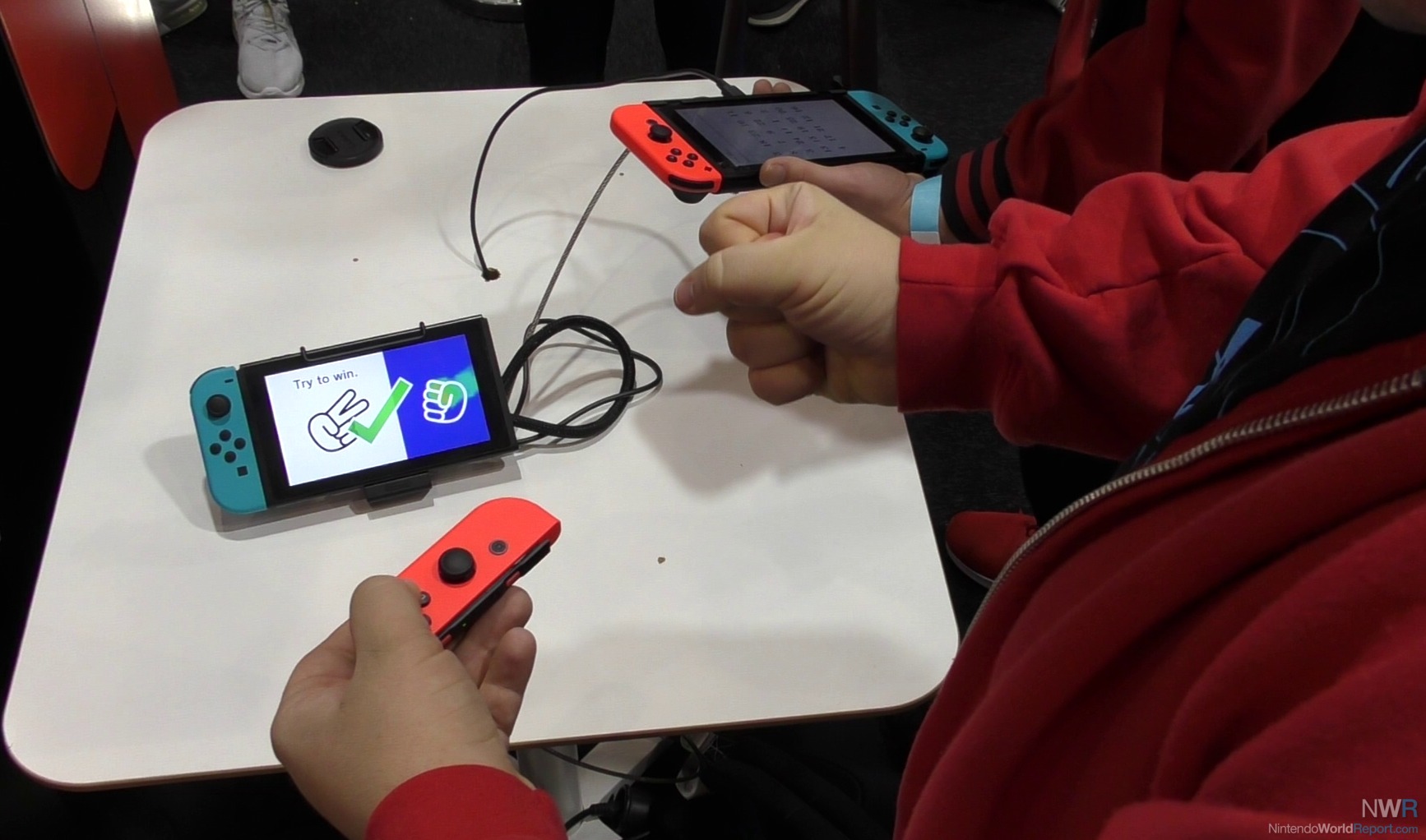 The other three games in Quick Play (Birdwatching, Flag Raising and Box Counting) have a distinct two player focus. Birdwatching and Box Counting are honestly extremely similar, with both games focusing on counting what is on screen. Players press ZL or ZR to count something, and press the L or R buttons to confirm the amount. The biggest difference between the two is the speed at which they move. The boxes are visible for a limited amount of time on screen, while you can take your time with the birds. That being said, the birds will move around and can completely throw you off your game. In Flag Raising, players have to copy the movement of a character on screen and move a flag in multiple directions. The minigame is like a far more complicated version of Simon Says with you having to follow the instructions to a tee. You won't get points otherwise!

Daily Training is where testing your brain actually matters, and will count towards the progression you want to make. In addition to the IR camera games I've mentioned, Daily Training offers a plethora of old and new tests that you can dive into. Unlike Quick Play, players will hold the Nintendo Switch in a Tate mode fashion and use the included stylus (retail release) to play Brain Training the classic way. The touchpen's size was honestly pretty nice in practice. As someone who hated the stylus size on the last few Nintendo 3DS models, this one feels great. There is enough room to wrap your fingers around it and hold it like a proper pen.

Before we hop into the games, I must give props for the extremely clean UI. Each part of the training has a big button with one line of information on the task. For example: Calculations x25 featured the line ''A speedy calculation time attack!'' while Germ Buster mentions ''Some post-training relaxation''. In addition to the clear cut information and a sharp image, the icons also feature your best personal time and an icon to clarify if you played the minigame today. The Brain Age Check icon even says your current age to even further embarrass yourself in point of your pals. Finally, the exercise will appear in your Daily Training menu in the order that you last played them, so it becomes easy to return to your favorites. 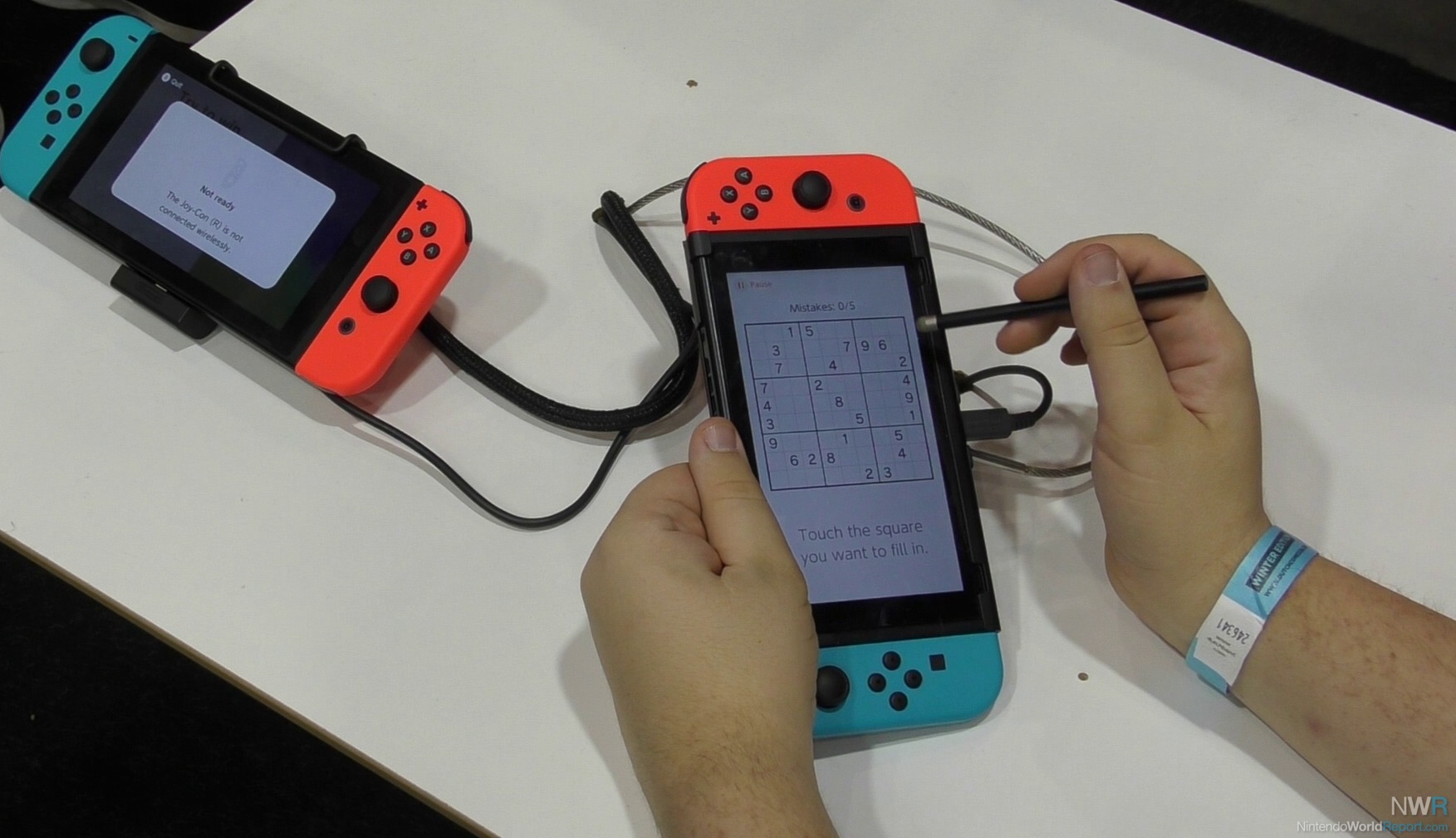 As I mentioned before, the file we were presented with was three days in, so it didn’t reflect on everything that is in the final game. The minigames we've seen in the menus are Calculations x25, Calculations x100, Germ Buster, Dual Task, Photographic Memory, Head Count, Reading Aloud, Sudoku, Masterpiece Recital, Finger Calculations, Finger Drills and Word Scramble. Some of you might remember from the older games in the series, like Calculations. You still write your numbers on the screen, just in the hope that the game accepts your handwriting. Other classics like Germ Buster and Sudoku sport a brand new look or new functions to support the new set-up. They are just as straightforward as they used to be in the Nintendo DS days, so not as elaborate as Devilish Brain Training/Brain Age: Concentration Training.

That being said, the new games are a feast for the senses. In Dual Task, you will be performing two tasks at the same time. In our demo, a little guy needed our help jumping over hurdles on top while we had to choose the highest number at the bottom. You really have to divide your attention, because screwing up at either end would give you six seconds on top of your final time. Photographic Memory requires you to remember a current photo and asks you about the photo you've seen before this. The exercise starts out extremely simple, but quickly starts to mess with you. Mirrored images will populate your field, and will completely throw you off your game. It is really intense, and forces you to take in details very quickly. Last but not least, we have Word Scramble. In this game, letters will float all across the screen. Your task is to find the words within the chaos, and quickly press on to the next screen.

Naturally, Brain Training offers the Brain Age test that the series is known for. The test focuses on three specific factors: Self-Control, Processing Speed and Short-Term Memory. During my first run of the Brain Age test, I felt pushed to the limit. Round one was clicking on the highest numbers, while the second part was counting loudly from 1 to 120. In the final round, the player has to remember 25 numbers and fill the boxes from memory one by one. Every Brain Age test throws different challenges into the mixture. There will be moments where you might be required to do the Joy-Con games or keep subtracting from a certain number. The challenge is meant to be played back-to-back, so don't worry if you fail them. Failing is simply a step to becoming better at training your brain.

Dr. Kawashima's Brain Training for Nintendo Switch leaves a fine first impression. Don't expect the game to overload your senses like Devilish Brain Training as that is not the intention. The focus is, just like in the old days, to focus on the task at hand and pushing yourself every day a little more. While that may not sound overly exciting for some, I'm really loving what their are doing with the exercises. The Joy-Con and new Daily Training offers are excellent additions, and broadens the scope of what the software can do for you. We won't have to wait long to start training the pink slab inside our heads as Braining Training for Switch releases on January 3 in Europe.

Get out of my head Kawashima!