Someone needs to Contra Code this.

It's never a good sign when the most exciting part of a demo is a power failure. 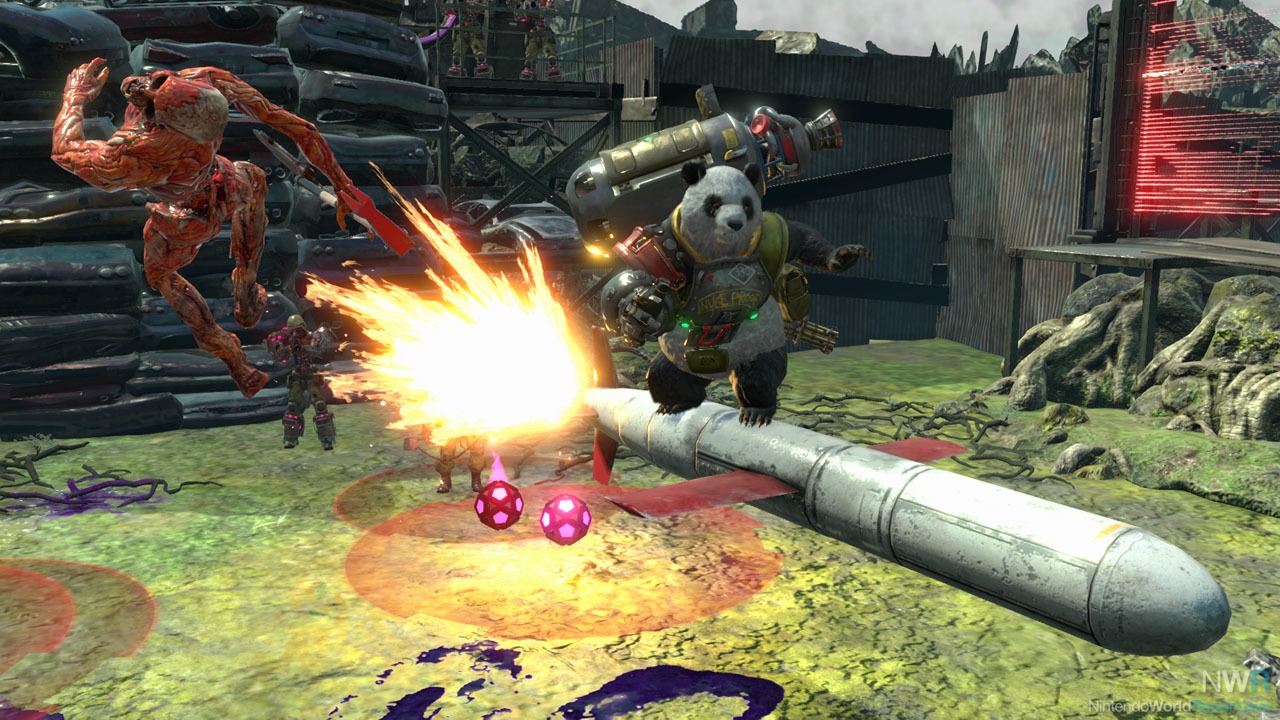 Such was the fate of Contra: Rogue Corps, the demo at E3 that was interrupted by the power surge/flicker/whathaveyou that knocked Treehouse Live off air. The trailer didn't exactly leave a good impression, but the demo was solid but inoffensive. Maybe it'd be more exciting if I picked the right character.

In the demo, the tutorial section sets you as Max, the human character who was in the army that Bill and Lance completely made redundant a couple of years prior (in storyline, Rogue Corps picks up after Contra III). This new Contra is an overhead view shooter with some third-person looter elements, as there are intended to be pickups of various rarities that boost the stats of the characters. After Max reaches the base, it's possible to switch to the other characters, so of course I went to the panda... but maybe that was a mistake, as I didn't have as much fun as I expected with his weapons. 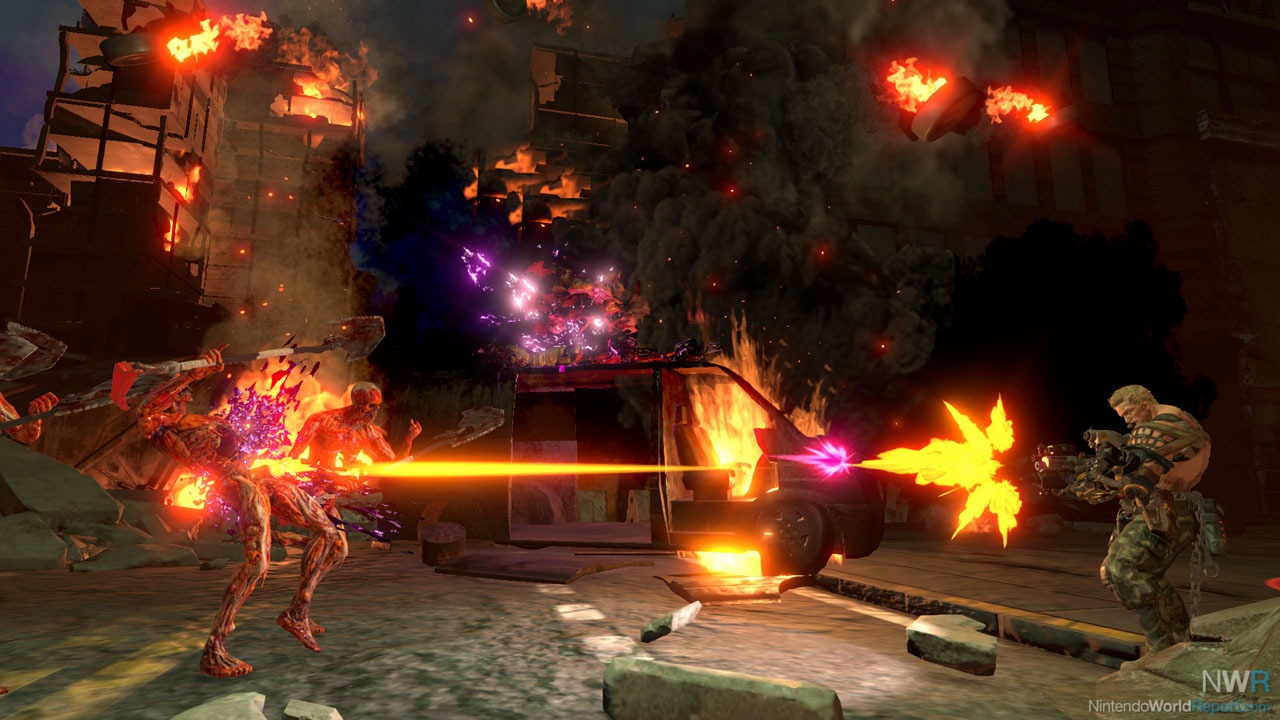 Each character has a standard gun and a unique weapon that are swapped between with the Switch Y button, as well as a screen clearing bomb and a super move. 2019 is also apparently the year of the warp, as certain enemies have to be stunned with a warp move (ZL) before hitting them with a unique finisher. Unlike pretty much every other Contra game I've ever played, you can't spam the fire button as the weapons will overheat. And when you have 25 enemies on screen at once, the weapons will overheat constantly and force you to run away for five seconds.

The demo itself ran fine on a PS4, though I suspect they're trading resolution for framerate as our Jared Rosenberg estimated the resolution at 720p. This may get ironed out before launch, however. There was one incident where I used a super move near an obstacle and got a nice up-close view of the obstacle. The voice acting is about as overbearing as would be expected in a tutorial sequence, while if there was music I couldn't hear it over the sound of the gunfire.

Definitely wait for our review of Contra: Rogue Corps before you jump in. There's a tiny spark of potential here, but Contra was always at its best as a run and gun game and when you can't run and gun forever, what's the point?

Contra games that stray from the side scrolling run n gun gameplay are crap.  So the second I read this was an overhead view shooter I suspected it wasn't going to be very good and unfortunately these impressions suggest that my instincts were correct.  Contra has been handed to designers that seemingly didn't want to make an actual Contra game more than pretty much any other series... except Star Fox. ;)

Actually both Contra and Star Fox are series where the gameplay is pretty simple and straightforward and I suspect that developers think the mechanics are too shallow for a "modern" game.  Contra doesn't need to be complicated - you run from here to there shooting everything that moves while jumping across platforms and dodging enemy fire.

Based only on the description here, this game doesn't sound at all like what I want/expect from a Contra game.

Overheating guns, running away from enemies while you are helpless, stunning enemies before you can finish them... Nope. None of this sounds like a good idea for an entry in the Contra series.

The game might end up being decent anyway, but I'm no longer excited. That said, maybe it's time to run through Contra 4 again (which is an excellent game), and I'll finally get a chance to play Contra Hard Corps when the Genesis Mini comes out... so it's not like I'm hurting for Contra love.

Actually both Contra and Star Fox are series where the gameplay is pretty simple and straightforward and I suspect that developers think the mechanics are too shallow for a "modern" game.  Contra doesn't need to be complicated - you run from here to there shooting everything that moves while jumping across platforms and dodging enemy fire.

The funny thing is both series have perfect templates that increase longevity.  For Contra you have something like Hard Corps which has multiple endings, and different characters to play as.  Contra 4 has mission mode with a ton of varies gameplay challenges that are broken down harder parts of the main game that give unlockables for completing.  Star Fox of course has Star Fox 64 which already had multiple paths each time you play as well as the medals to collect with reward for getting a Gold on every mission with an even harder difficulty setting.

It's like the developers worry that players will quit the game once they see the credits for the first time, and not realize a lot of the value for these type of games is their replayability with higher difficulty and other rewards for the players to achieve.  It's the same problem many of the 3D Sonic games have suffered as well where they fill them up with so much filler just to drag out the playtime instead of focusing on making the core experience solid and adding a lot of extra's based of that gameplay to keep players busy.

This is what always annoys me when some people complain about a game being too short as a negative.  A lot of the time a game that is accused of being too short has things like higher difficulty settings and other extra gameplay features that can easily increase the gameplay by 2-3 times.  These kind of complaints are what leads to these situations where the developers feel they need to change what works so they can drag out the main game as much as possible.

Anyway, I was willing to give Contra: Rogue Corps a chance. Contra 4 is the my favorite followed by Contra III: The Alien Wars, and I had my fun with the PS2 era Contra games including Neo Contra which futzes with the camera. However, just about everything ejamer said above makes me not-today-back-away-disco-lady from Contra: Rogue Corps.

I've noticed that for a while it seemed that the game industry was growing up with me.  It makes sense because my parents' generation didn't play videogames so really kids born in the 70's and 80's were the first ones to grow up with videogames.  For example we started seeing M rated games around the time that the Atari or NES era kids were becoming teenagers or adults around the mid 90's.  The industry recognized it wasn't just for kids anymore and started offering games for a different age group.  But for the most part is has kind of stopped around college-age adults.  The exception are retro-themed games that are obviously targeting adults that played games like that when they were kids.

The reason I bring this up is in regards to game length.  When I was 20 a longer game was a better game.  Now that I'm 37 with a house to keep up and a career and a bunch of other adult responsibilities I don't have as much time so a shorter game works better for me.  And I don't even have kids and most people my age do so they have even less free time.  The game industry should pick up on that and make games that are intended for adults in their 30s and 40s that have a shorter length and are designed more to play for a half hour here, an hour there, and you can not play for two months and not be lost when you get back.  Contra is the sort of series that works like that and really the brand only has value with people my age.  16 year olds don't give a damn about it.

Wait, THIS is Contra?!?! I remember this video, but I some how missed the name of the game. I didn't realize it was CONTRA! I just assumed it was Walmart brand Overwatch.

So watched some videos. This looks more like a Total Carnage sequel than Contra.
It also kind of reminds me of the lousy Bionic Commando reboot that lost sight of why the original game was beloved and then mostly bombed on release.

I don't know. The game doesn't look terrible, and maybe the Contra name lost any meaning to new gamers so there is no harm in branding it this way. But I'm not sold on this at all.

I can understand fans of Contra being disappointed, but as someone with no connection to this series, I still think it looks like a fun co-op romp.